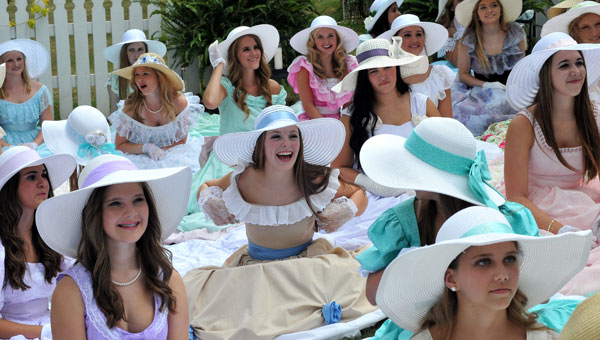 The Helena Belles celebrated the beginning of their fourth  year since the organization was begun and spearheaded by Amy Bolt.

On a bright and steamy afternoon at Magnolia Manor, these “Ambassadors of the City of Helena” inducted 25 new members, who were escorted by their fathers. The existing 37 members were then escorted by Belle Beaux, Seth Kelosky.

“The Belles bring attention to this city in a way like no other,” Mayor Mark Hall noted. “We are proud to have this organization. It’s remarkable that this many young women can come together and be this dedicated in giving back to the city.”

“What sets us apart from other organizations is the amount of charity work that we do,” said Amy Bolt. “We’ve been able to give out $10,000 in scholarship money and we hope to grow that.”

Growth of the organization has necessitated forming a new committee of five who will assist Bolt.

Service Projects included Market Days 2014, where the belles have been greeters and helpers for the understaffed farmer’s market committee all summer—making tomato sandwiches and serving up peaches and ice cream.

This fall they will be Cureleaders for the Susan G. Koman Run; participate in the Walk for Diabetes, Camp Smile-A-While and the Jingle Bell Run for Arthritis Foundation.

The Belles will march in the UAB Homecoming Parade in December and appear as elves for Helena’s Annual Christmas Parade. Additional funds will be raised from sales of t-shirts and decals.

Formal events will be Belles & Beaux, in November, and the Helena Belle Ball will be held Jan. 17, 2015, with the theme fire and ice.

Excitement in the air in Helena