Panthers come up short in final game of season 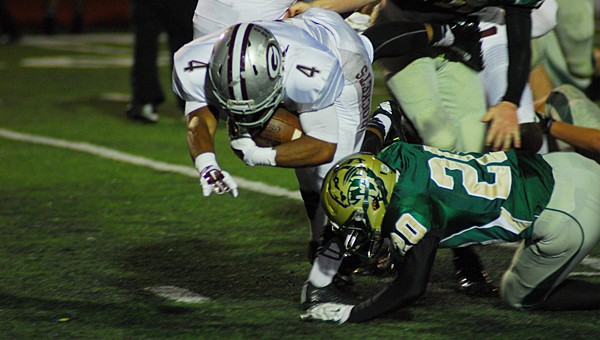 Pelham’s Auston London (20) brings down a Gardendale running back during the Panthers’ 55-38 loss to the Rockets on Oct. 30. (Reporter Photo/Neal Wagner)

PELHAM – The Gardendale Rockets fought off a furious second-half comeback attempt by the Pelham Panthers on Oct. 30, taking a 55-38 victory over the home team.

Pelham scored 21 unanswered points in the fourth quarter to pull within 16 of the Rockets before Gardendale opened its lead with a 48-yard touchdown run with 2:17 left in the game.

“We kept battling, and they’ve done that all year,” PHS head coach Brett Burnett said of the Panthers, who ended the year with a 3-7 overall record. “I’m proud of our seniors who came out here and gutted it out.

“We didn’t always come out with a win, but we kept battling,” Burnett added. “We played through a lot of adversity this year, a lot of injuries.”

Gardendale ran the opening kickoff back for a touchdown to start the game before Pelham answered on a 40-yard field goal by Austin Bowen to cut the Rockets’ lead to 7-3.

The Rockets then reeled off 24 unanswered points to end the first half with a 38-10 lead.

Pelham appeared to score a touchdown late in the second quarter on a trick play involving a pass from Logan Burnett to Wilburn to Daniel Lawson and back to Burnett, who launched the ball downfield to JT Kepler for a 69-yard run into the end zone. However, the play was called back on an illegal procedure penalty.

Gardendale recorded a pick-six late in the third quarter before Logan Burnett again found Wilburn for a 49-yard touchdown pass. Bowen’s PAT split the uprights to cut the Rockets’ lead to 45-17.

After Gardendale tacked on a 32-yard field goal to go up 48-17, Pelham began its comeback bid when Logan Burnett connected with Kepler on a 13-yard touchdown pass and successful Bowen PAT.

JT Reed continued the Panthers’ roll when he caught a 67-yard touchdown pass from Logan Burnett. The 2-point conversion attempt fell short, bringing the game to 48-38 with 2:39 left in the game.

Members of Pelham’s volleyball team celebrate after scoring a crucial point in a win over Arab on Oct. 30. With... read more