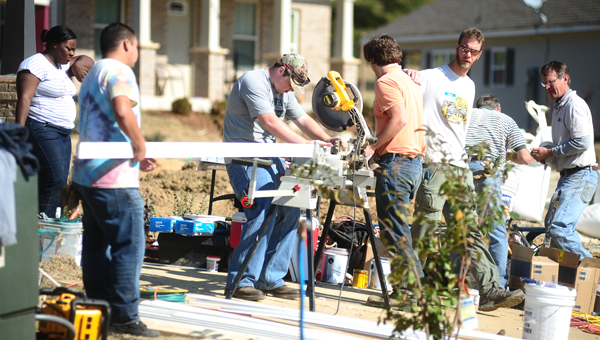 A group of Pelham High School students volunteered their day off to build with Habitat for Humanity on Veterans Day. (Reporter Photo / Jon Goering)

CALERA—For most students, a day off from school means sleeping in and relaxing. But not for a group of 12 Pelham High School students who spent Veterans Day working on two homes with Habitat for Humanity.

Led by PHS English teacher Ryan Dye, the group of 10th through 12th grade students reported to school at 7:30 a.m., boarded a school bus and made the half-hour trip to Calera to build.

Dye said the idea for the Veterans Day Habitat for Humanity build was a “shot in the dark” and the students were given no extra incentives for volunteering their time, but the student response was enthusiastic.

“They were super enthusiastic,” Dye said. “I was really impressed with them. They could have slept in with the rest of them, but instead they’re out here.”

“It’s best to help as much as you can,” PHS senior Taylor Sund said of her decision to volunteer on her day off.

“We have a bunch of new rookies out here figuring it out,” Dye said. “They’re using math in real life out there.”

Beyond calculating measurements and learning to use construction tools, the day provided the students other valuable lessons.

PHS participates in two Habitat for Humanity builds each year: one on Veterans Day and one on a half day before Christmas break. Dye said he enjoys working with the organization because students can see the results of their work.

“They’re seeing what their charitable deeds do,” Dye said. “You get to see your product.”

Although the Nov. 11 build was a first for many of the students, they enthusiastically said it would not be their last time working with Habitat for Humanity.