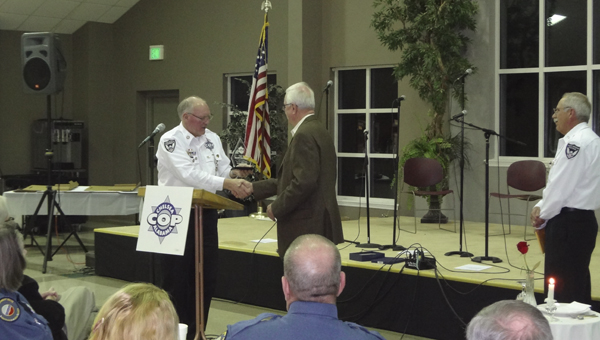 Chelsea C.O.P. member and City Council member Dale Neuendorf presents former Shelby County Sheriff Chris Curry with an award for his support of the C.O.P. since its formation in the late 1990s. (Reporter Photo/Emily Sparacino)

CHELSEA – A group of local volunteers were lauded Feb. 24 for their efforts in helping Shelby County law enforcement patrol Chelsea and assist residents in emergency situations.

Members of the Chelsea Citizen Observer Patrol (C.O.P.) received awards for their service in 2014 at the group’s 16th annual awards dinner at Liberty Baptist Church.

“We at the Sheriff’s Office try to support them as best we can,” Shelby County Sheriff John Samaniego said of the group. “We appreciate each and every one of you.”

Organized in 1999, the Chelsea C.O.P. is an all-volunteer organization sponsored by the city of Chelsea and the Shelby County Sheriff’s Office. Following training, C.O.P. volunteers serve as “the eyes and ears” for the Sheriff’s Office by observing and reporting suspicious activity and assisting officers with traffic control during emergencies such as car wrecks.

Former Shelby County Sheriff Chris Curry said the idea for the Chelsea C.O.P. surfaced when he was a captain with the SCSO.

“It’s quite an accomplishment for any volunteer organization to still be in existence after 16 years,” Curry said. “The mayor and City Council were absolutely crucial in making sure this was done right. You have a very, very good sense of community that exists.”