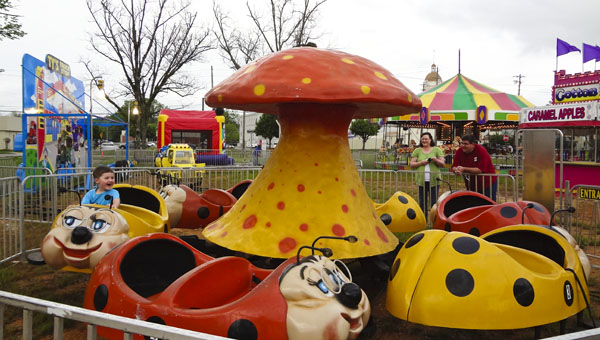 Richard and Denise Houston of Columbiana brought their young son, Kellen, to the fair on April 10.

“He’s our only child, so we try to do all the fun things with him,” Denise Houston said.

Eliot Ingram, 4, insisted on going down a large slide multiple times before she and her mother, Bethany Wiggins, walked to other rides.

“For two days, all she’s been doing is talking about the big pink slide,” Wiggins said. “This is the first time she’s been old enough to do stuff by herself. She’s super excited.”

The Kiwanis Club of Columbiana sponsored the carnival and will use proceeds for the club’s service projects.

According to Kiwanis Club Secretary and Treasurer Michael Letlow, the carnival will not replace the Shelby County Fair the club holds every fall as a fundraiser.

Letlow said the club has had to reduce donations it gives to schools, libraries and other groups over the last few years because fair attendance has dropped.

“For several years we have been trying to do a Spring Carnival to help off set the decrease in revenue from the Fair each year,” Letlow said in a Facebook post on April 6. “We have had to eliminate some groups we supported in the past and reduce most of the others. For some reason or another this has not worked out in the past.”

“We’re hoping to make an annual event out of it,” Kiwanis Club President Sid Wheeler said. “Sonshine seems to be a really good group of people.”