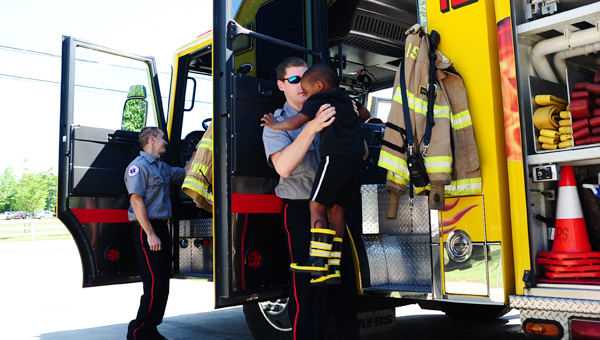 Alabaster firefighter Stephen Davis helps 4-year-old Kole Underwood out of the department’s Engine No. 12 during a pre-k class visit to Fire Station No. 2 on April 30. (Reporter Photo/Neal Wagner)

“When he woke up this morning, he had his boots ready,” said his mother, Martha, as Kole excitedly pored over the equipment stashed on an Alabaster Fire Engine No. 12. “He said ‘If I’m going to the fire station, I have to wear my fire boots.”

“Those look just like ours,” Fire Chief Jim Golden said after Kole proudly displayed his footwear to the chief.

Kole joined about 20 of his classmates from the Creek View Elementary School pre-K program in touring Alabaster Fire Station No. 2 off Butler Road on April 30 as part of the program’s curriculum.

During the visit, the children and their parents got an up-close look at the station’s living area, offices and bedrooms before moving on to the main attraction: The fire truck parked in front of the building.

After the students climbed through the truck’s passenger area, each child got a chance to sit in the driver’s seat before learning about the various equipment stored in the compartments lining the outside of the vehicle.

Excitement and questions abounded as the kids learned about the different sizes of fire hoses, a generator-powered fan used to clear smoke from a burning house and even a pneumatic cutting tool used to extract victims trapped in cars.

Pre-K student Emma Smith said she was most excited to sit in the driver’s seat of the fire truck, and asked her mother, Tanya, if she could do it again.

“She shot right out of bed this morning. She’s been talking about this for four weeks,” Tanya Smith said. “This isn’t something kids usually get to do.”

Golden said student visits are fun for the kids and the firefighters, but also provide a benefit in the community. In 2012, a 7-year-old child who had learned about fire safety during a Fire Department visit to Meadow View Elementary School likely saved his family’s life after ensuring his home’s smoke detectors were working.

“That’s an example of how valuable these kinds of things can be,” Golden said.