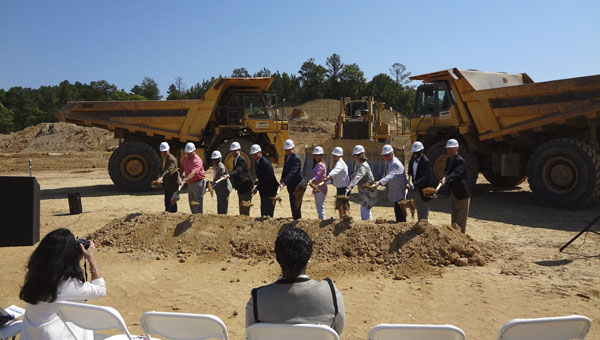 PELHAM – Construction on one of Pelham’s new elementary schools officially began May 5 as city and school system leaders broke ground at the site.

“It is an emotional day,” Pelham Board of Education President Rick Rhoades said during the groundbreaking ceremony for Pelham Ridge Elementary School, a two-story kindergarten-through-fifth-grade school being built on property located off Shelby County 52.

Pelham Ridge Elementary will sit atop roughly 22 acres of land on Applegate Parkway and is set to open for the 2016-2017 academic year.

“This will be a beautiful facility,” Rhoades said.

The school will be 120,000 square feet with 45 classrooms designed to accommodate 125 children per grade, but could hold 800 or more students if necessary, Pelham City Schools Superintendent Dr. Scott Coefield said.

“It is designed with safety as a top priority,” Coefield said. “We look forward to serving Pelham in this school building for years to come.”

The Pelham BOE awarded a nearly $19.2 million bid to Argo Construction Company for the building at an April 27 meeting.

Pelham Ridge Elementary is one of several new schools forming in the Pelham City School System.

Pelham Park Middle School will be constructed on land in Pelham City Park on property adjacent to Belle Vista Mobile Home Park, and will open in 2017.

“We are going to build a world-class school system for Pelham, Alabama,” Rhoades said.

Rhoades, Coefield and Pelham City Council President Rick Hayes thanked the board and everyone that has contributed to the Pelham Ridge and other ongoing school projects.

“These people, especially starting a new school system, have really worked tirelessly,” Coefield said. “I feel really good that it was a collaborative process.”

Mayor Gary Waters also commended the board for working together to bring the Pelham Ridge Elementary project to fruition after planning started a year and a half ago.

“I’ve never seen a more committed and like-minded board in my life,” Waters said. “I’ve never seen so much progress in such a short period of time. This is just a part of the overall plan to raise Pelham City Schools to a higher plane.”

“It’s a great day in Pelham,” Gary Owen with Goodwyn Mills Cawood said. “This groundbreaking is kind of the tip of the iceberg. It’s going to be a fantastic place to raise your kids in the schools.”