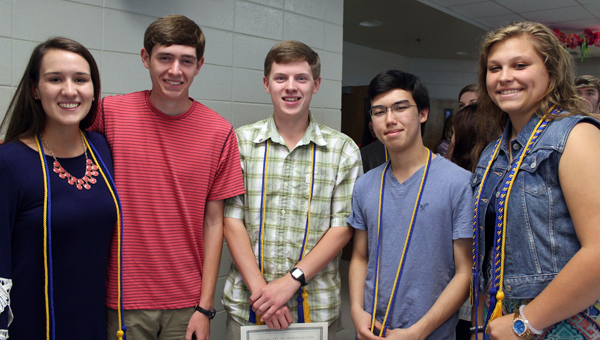 “Works for me,” said Sansom.

Luckily, these girls agreed. As the only returning students in Quill and Scroll, the publication and media honor society, there was no third to break a tie.

After our school split, we’re working to build our numbers in student media.

“I’ve never been in charge of an Honor Society Induction before,” I announced to the PHS auditorium audience. “In fact, this school year, I’ve had several responsibilities that I’ve never had before—I was Camp Pelham Director, I helped sponsor a Homecoming Dance, and now I’m sponsoring an honor society for the first time.”

With fewer teachers, we struggle to offer our students the same opportunities they’ve always enjoyed and more. Teachers have taken on double duties this year. New opportunities bring lessons.

“Let the Quill represent the meticulous care that must be put forth to turn thoughts into proper language; let the Scroll represent the permanent quality of good writing,” reads the Quill and Scroll induction ceremony. “Individuals should place the TRUTH and the search for TRUTH above all other ideals,” the prompt continues.

I’m stunned by the screaming all caps of TRUTH; however, as these seniors prepare to depart, TRUTH must become a personal search as school’s comfortable black and white recedes to the amorphous gray space of adulthood.

“In whatever field you choose to enter, will you always painstakingly seek the truth?” the prompt echoes.

The students smile, waiting for the joke that they expect to follow senior Lowrey Young’s funny speech. Instead, I give them Stephen Crane’s poem.

“Or you are abominably wicked;

And after I had thought of it,

These seniors faced immeasurable change last spring when they chose between schools for their senior year.

The Class of 2015 learned to seek their own truths early. They’re confident enough to be rookies again, to face the change, to learn the lessons.

They will change the world.