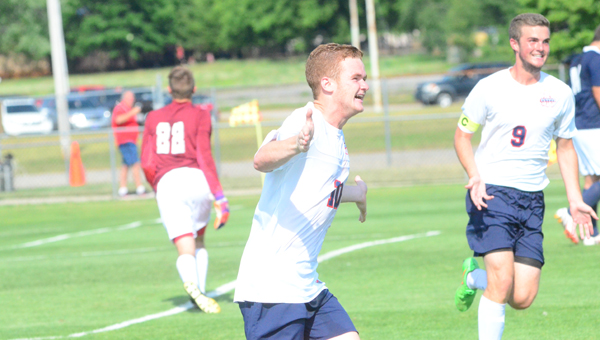 Hunter Ratliff celebrates his first goal of two in the May 8 7A state semifinal game against Bob Jones. Ratliff and the Eagles knocked off the top-ranked Patriots 3-0 to advance to the state finals. (Reporter Photo / Baker Ellis)

HUNTSVILLE – On March 7 the top-ranked squad in 7A boys soccer, Bob Jones, beat the visiting Eagles from Oak Mountain 4-2. When the two teams met in the state semifinal on May 8, that memory was fresh on the Eagles’ minds. Bob Jones (20-4-2) came in to the 7A state semifinal game with 15 shutouts to its name and had scored over two goals in every game save eight. The third-ranked Oak Mountain squad (22-4-1) wanted redemption, and got it to the tune of a 3-0 victory to earn a berth in the state finals.

Hunter Ratliff beat a horde of Bob Jones defenders 22 minutes into the game and pushed one past the Patriots goalie to score the first goal of the game and break the 0-0 stalemate. The slim 1-0 lead held until the second half, but just barely. Five minutes into the second half Oak Mountain drew a penalty kick, and Ratliff pumped the free shot into the back of the Bob Jones net for his second goal of the game. In the 61st minute of action, Caleb Van Geffen scored the third goal of the game via an assist from Cameron Ritchey to give the Eagles an insurmountable 3-0 lead, which they held on to for the win.

Oak Mountain’s trek to the finals has been difficult, to say the least. In the opening round of the 7A tournament, the Eagles knocked off No. 2 Vestavia Hills 2-1. In the quarterfinals they beat No. 4 Hoover in penalty kicks before facing the top-ranked team in the state.

“We’re calling it the gauntlet,” first year head coach Daniel DeMasters said after the game of the journey his Oak Mountain squad has had to endure to get to this point. “We’ve called it that since the beginning. We’re three steps down and just have one more to go to hoist the trophy. It’s going to be a good one tomorrow.”

In the finals, Oak Mountain will face an Auburn squad that is not ranked in the top 10. Oak Mountain has reached this point the last three years in 6A, making it to the state championship, but losing all three times. The Eagles will look to break into the winners circle under the first year of DeMasters’ reign with a strong performance tomorrow.

Lady Eagles get past Bob Jones, advance to 7A finals

The Oak Mountain Lady Eagles beat Bob Jones on May 8 in the 7A state semifinals by a final of... read more