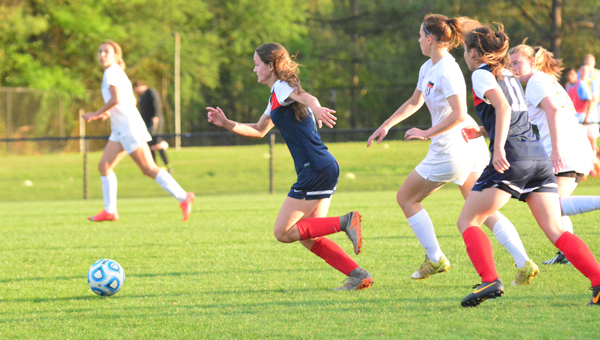 Oak Mountain sophomore Julia Pack scored 19 goals and had 17 assists in 2016 and has been named the Gatorade Player of the Year in the state of Alabama. (File)

NORTH SHELBY – Julia Pack, the sensational sophomore center-midfielder from Oak Mountain High School, was named the girls’ soccer Gatorade Player of the Year for the state of Alabama on May 17. Pack scored 18 goals and registered 17 assists in her sophomore year, her third year as a varsity starter, and helped lead Oak Mountain to a 22-4-1 record. Pack won a state title in each of her first two seasons on varsity before eventual champions Vestavia Hills knocked the Lady Eagles out of the 7A tournament this year in the second round.

Oak Mountain head coach David DiPiazza has on multiple occasions called Pack the best player he has ever coached, and has said she is one of the most talented players in the state, if not the most talented, as well as one of the hardest-working players he has ever coached as well. Her soccer IQ is one of the highest around, thanks to the many hours she spends not only playing the game, but studying it as well. She rarely, if ever, makes a mistake with the ball at her foot.

Pack also sports a weighted 4.31 GPA in the classroom, which is a large factor taken into consideration by Gatorade and USA Today when handing out this award. She has been verbally committed to play college soccer at Auburn since her freshman year at Oak Mountain, and still has the chance to lock up another pair of state titles before she leaves the prep ranks.

The Gatorade Player of the Year program annually recognizes one winner in the District of Columbia and each of the 50 states that sanction high school football, girls volleyball, boys and girls cross country, boys and girls basketball, boys and girls soccer, baseball, softball, and boys and girls track & field, and awards one National Player of the Year in each sport, per a press release sent out by Gatorade in reference to the award. The selection process is administered by the Gatorade high school sports leadership team in partnership with USA TODAY High School Sports, which work with top sport-specific experts and a media advisory board of accomplished, veteran prep sports journalists to determine the state winners in each sport.

Pack joins Bailee Hartnett and Toni Payne, who won the award in back-to-back years in 2012 and 2013, as the third Lady Eagle to win the award.