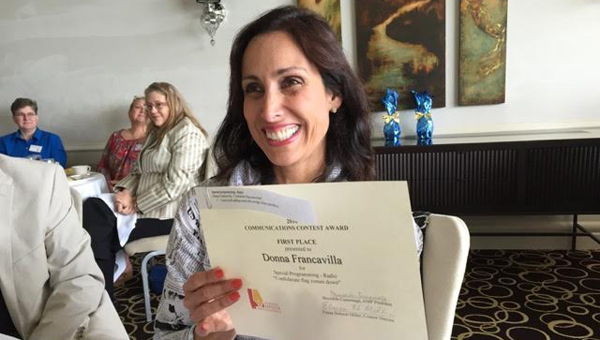 Donna Francavilla, founder of boutique PR firm Frankly Speaking Communications LLC, was announced as the 2016 Alabama Media Professionals Communicator of Achievement Award at the awards banquet held at The Club in Birmingham. (Contributed)

Donna Francavilla, founder of boutique PR firm Frankly Speaking Communications LLC, won five first-place awards in the statewide yearly competition within Alabama Media Professionals and the most prestigious award given by the organization.

Francavilla, a Shelby County resident, was announced as the 2016 Alabama Media Professionals Communicator of Achievement Award at the awards banquet held at The Club in Birmingham.

The Communicator of Achievement Award is presented to journalists based on professional achievement, community service and service to the organization.

The winner of this award represents the AMP Chapter at the NFPW.

Francavilla has worn many hats as an entrepreneur with her firm, Frankly Speaking Communications LLC, as a public relations professional, talk show host, blogger, writer, podcaster and audio/video specialist.

She has filed stories from around the world (Cuba, Spain, Italy, France and Germany, to name a few) for organizations like Agence France Presse, Voice of America, the Oprah Show and CBS News.

She showed her dedication to reporting while on vacation when she broke the news of a mudslide after being airlifted by helicopter with her daughter in Peru.

“Francavilla is the first to win the Communicator of Achievement Award since 2009. Verna Gates was the previous nominee and was runner-up to American icon syndicated lifestyle columnist Heloise and won a lifetime achievement award from NFPW.”

Francavilla will be featured in an upcoming article in B-Metro Magazine.

The Board of Education addressed concerns with personnel actions at a May 23 meeting. (File) By JESSA PEASE / Staff... read more