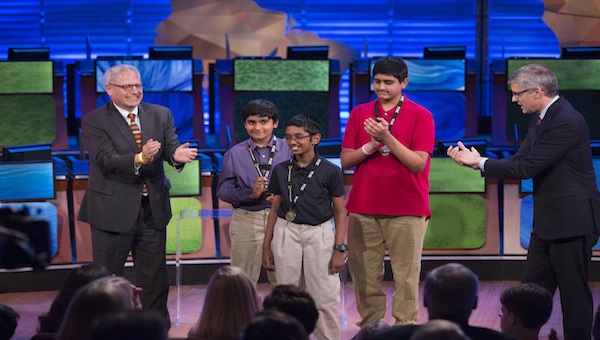 A Hoover student finished in this year’s National Geographic Bee as the third-place winner and recipient of a $10,000 college scholarship on May 25.

Twelve-year-old Kapil Nathan, a sixth-grader at Brock’s Gap Intermediate School, was among 54 state and territory winners who competed in the preliminary rounds of the 28th annual National Geographic Bee on May 23. Nathan finished in the Top 10 and advanced to the final round held May 25 at the National Geographic headquarters in Washington, D.C., according to Nationalgeographic.com.

Nathan was also a Top 10 finisher and recipient of $500 in the 2015 National Geographic Bee when he was a fifth-grader at Mt Laurel Elementary School.

Rishi Nair of Seffner, Fla., took first place in this year’s National Geographic Bee. As the champion, Nair, a 12-year-old sixth-grader at Williams Magnet Middle School, received a $50,000 college scholarship and a lifetime membership in the National Geographic Society.

Nair gave the correct answer of “Galápagos Islands” to the following question to win: “A new marine sanctuary will protect sharks and other wildlife around Isla Wolf in which archipelago in the Pacific Ocean?”

Journalist and humorist Mo Rocca moderated the final round of the competition.

The 2016 National Geographic Bee included nearly 3 million students in 11,000 schools in all 50 states, the District of Columbia, U.S. Atlantic and Pacific territories and Department of Defense Dependents Schools.

The annual competition is open to students ranging in age from 10 to 14 in fourth through eighth grades.

At Hoover High School and Spain Park High School, when some students have a tough time meeting standards and aren’t... read more