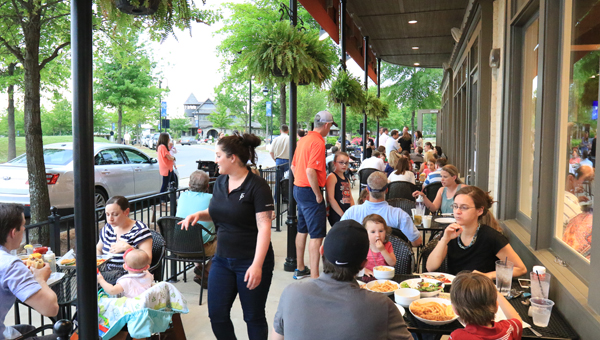 The restaurant wouldn’t be complete without a front porch for diners to enjoy. (Photo by Dawn Harrison)

One of Ross Bridge’s newest restaurants, Front Porch, offers cuisine that features traditional Southern influences — but jazzed up with a modern twist.

Oh, and pizza. Although pizza might not seem like an obvious choice for a menu that features shrimp and grits, meatloaf and pimento cheese, Front Porch Chef Matt Lagace had a simple explanation for it: “Everybody loves pizza!”

Lagace said when creating the menu, he tried to stay true to a sense of family coming together to enjoy good times.

“I really just pulled from what I like to do at home, what my family enjoys and things that I enjoy creating,” he says. “(There is) definitely a Southern influence to the menu. We just really wanted to create a comfortable atmosphere, kind of like you were just at a friend or family member’s for dinner. I think the menu is a reflection of that feel.”

Front Porch’s menu kicks off with an array of small plates, some of which include poutine, a dish of flash-fried hand-cut French fries topped with cheddar cheese curds and an au jus sauce; Ahi tuna nachos, which are fried egg roll skins topped with Ahi tuna and sesame ginger slaw; and a dish that Lagace says is a customer favorite “by far,” the candied bacon bombs — candied kielbasa sausage wrapped in Conecuh bacon, served with fried cheese curds.

There are burgers and sandwiches to choose from, as well, and the aforementioned pizzas include the Farm To Pie, featuring grilled chicken, zucchini, yellow squash, mushrooms and sweet peppers on a crust with roasted garlic-infused olive oil. For diners who can take the heat, there’s the El Diablo pizza, with chorizo, Italian sausage, onions, jalapeños and crushed red peppers on a roasted habanero pizza sauce.

“I really love the menu as a whole. It all came from my heart, and I just love seeing others enjoy it too,” Lagace says.

Lagace’s eventual occupation as a chef was in the cards from a young age.

“I believe that food has the power to bring people together. There is nothing I love more than to see people come together to enjoy my creations,” Lagace says. “It was this realization that led me to pursue a career in culinary arts. I started my culinary journey at a young age, cooking alongside my mother preparing family meals. I always chose to spend this time in the kitchen instead of out playing with my brothers and neighborhood friends.”

Lagace eventually got a culinary degree and has become a well-known face around Birmingham, with stops at Nonna Rose, Prairie Fire Grille, Bellini’s Ristorante and Rogue Tavern.

He became involved with Front Porch when it was just an idea.

“I had worked with Jeremy Hackney, one of the owners of the Front Porch, in the past when I was at Rogue Tavern. We remained friends and stayed in touch over the years. He started talking about opening a new place, and I just knew it would be a great fit for me,” Lagace says.

Front Porch opened March 8 of this year. Lagace says the community has welcomed the restaurant “with open arms.”

“We have been blown away,” he says.

Lagace says he and Front Porch’s other employees plan to continue striving for the best customer experience possible — no matter who the customer is.

“I feel that the atmosphere is great. It doesn’t limit itself to one type of feel,” Lagace says of Front Porch. “You can bring the kids or come on a date or business meeting. It really just has something for everyone.”

Front Porch is located at 2301 Grand Avenue in Ross Bridge, in the former location of The Villaggio restaurant. For more information, look up Front Porch Restaurant on Facebook or visit Frontporchrossbridge.com.