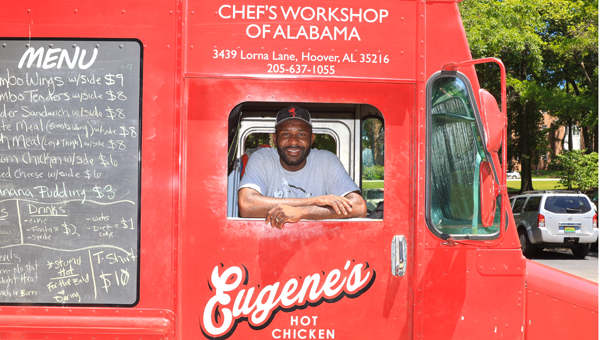 Nothing says southern cooking like fried chicken that melts in your mouth.

The crispy crunch of fried chicken that melts in your mouth is a taste all southerners know well. Add in a kick of heat, and you’ve got a unique flavor you can’t find just anywhere.

Luckily, Hoover residents can sink their teeth into this spicy dish thanks to Zebbie Carney and his food truck, Eugene’s Hot Chicken.

Carney grew up where the hot-chicken movement got its start: Nashville, Tenn. He remembers frequenting Prince’s Hot Chicken Shack, where this dish is said to have originated.

“Hot chicken is nothing new to me. It’s a totally different flavor than regular fried chicken: It’s almost like a new food,” Carney says with a laugh.

He left those familiar tastes for a while when he moved to Hoover seven years ago to become the executive chef at J. Alexander’s. “I love the restaurant industry. There are no two days alike,” he says.

It was during his time there that he started thinking about opening his own business — and he wanted to go back to his roots.

“I decided I was going to bring hot chicken to Birmingham,” Carney says. “There wasn’t a hot chicken restaurant here.”

But first, he needed to get a plan in place. He read about The Big Pitch in the Birmingham Business Journal in 2014 and decided to submit his business plan. There were about 100 people who entered their pitches, and Carney came in second.

After getting some business and legal advice through the competition, he began testing out the market.

Carney started bringing his food to different restaurants that let him takeover with his menu for a day last October. After seeing how much people enjoyed his food, he decided to open a food truck: Eugene’s Hot Chicken.

Something Carney gets asked regularly is where the name for the food truck came from. It was a way to honor his stepfather, Eugene.

“He raised me from when I was 4 to 17, when he passed,” he says. “Growing up in East Nashville was kind of rough. I could have gone different ways, so having that backbone in my life was great. I’m so grateful and wanted to honor him. I wanted to name my first restaurant after him.”

All of the chicken is available with southern (no heat), mild (touch of burn), hot (slight burn) or stupid hot (for the bold and daring).

“I’m a fan of the hot chicken sandwich. You get so many flavors,” he says. “You have the southern-style cold slaw, saltiness of picks, a toasted bun and, of course, the chicken. We just want to have good, southern fried chicken.”

Carney has tasted all of the chicken heat levels, but “every time I taste the stupid hot, I wonder why I tried that,” he says with a laugh.

Sometimes, they mix things up with items like hot fish, shrimp, gumbo and smoked vegetable quesadillas. He’s even working on a tofu dish, since some people don’t eat meat.

“We stick to a base menu and then try different things,” Carney says. “That’s the fun thing about having a truck: We can change up the menu.”

Beyond having a good mix of food, he also makes sure everything has a home-cooked taste.

“It’s southern comfort food,” Carney says. “All of the ingredients are fresh, nothing is canned and we make everything daily. It’s very unique, and it’s just different.”

They even have classic sodas like root beer made with sugar cane and cream soda.

“We want to have that old-school, chicken-joint feel but also have something new and trendy for the young people,” he says. “We see people from all ages and walks of life.”

Residents can find the truck around town at farmers markets, churches, office complexes, hospitals, breweries and catering at private events.

The catering menu is larger and includes additional dishes like deviled eggs, collard greens, macaroni and cheese and heirloom tomatoes.