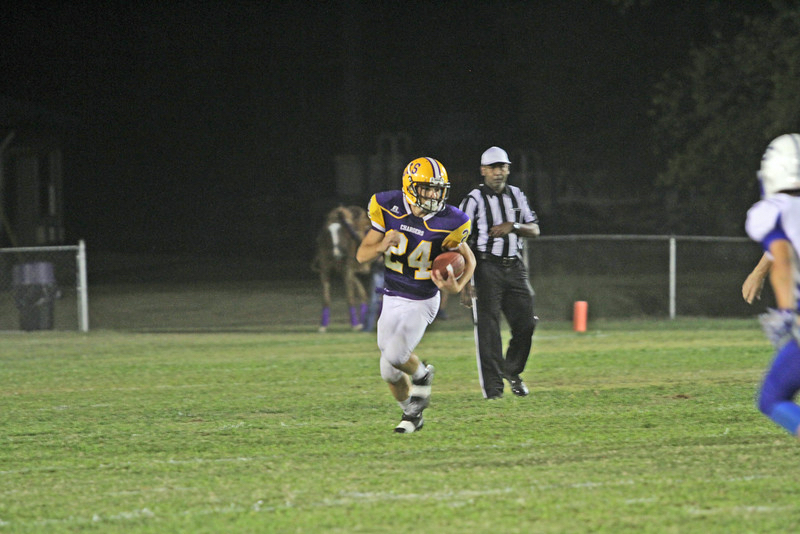 Jake Blankenship and the Cornerstone Christian Chargers claimed their first region title in 19 years on Oct. 13 with a 22-19 win over Macon-East Academy. (File)

“After 19 years and being the second team for our region five times, this is pretty good. The kids were really excited about it. We’d built it up all week. It’s good for the school,” said CCS head coach Tim Smith. “The kids played extremely, extremely hard in a very physical ballgame. I’m just glad they kept fighting.”

Macon-East scored on the first play of the game to take a 7-0 lead, but Cornerstone answered with a 13-yard touchdown pass from Tyler McNamee to JoJo Joiner. The Macon-East Knights answered to go up 13-6 at the end of the first quarter.

Logan Tucker tied it up with just over a minute to play in the first half on a six-yard touchdown run. Joiner added a two-point reception to give the Chargers a 14-13 halftime lead.

The Knights once again took the lead, 19-14, early in the third quarter, but McNamee found Joiner in man coverage for a 23-yard strike with 3:30 to go in the quarter. McNamee then punched in the two-point conversion to give CCS a three-point cushion, 22-19.

McNamee finished the night with 101 yards on 13-of-21 passing and two touchdowns, giving him 14 for the season. He also had 47 yards rushing and five tackles on defense. Tucker led the ground game with 71 yards on 19 carries, while Joiner had 66 yards on seven receptions. He now has nine touchdowns and 27 receptions this season.

Both teams traded punts in the fourth quarter, with CCS getting the closest to the goal line, stalling out on one drive at the Macon-East 30.

Jahnari Chisolm led the Chargers’ defense with nine tackles and a sack. Theo Mangos had two sacks and eight tackles, while Jake Blankenship had eight stops and a forced fumble. Tucker had seven tackles.

Cornerstone (6-2, 4-0) will host cross-county rival Coosa Valley Academy on Oct. 21 for Senior Night and its final region game. Macon-East falls to 1-5 overall and 0-4 in the region.

Zalon Reynolds rushed for three touchdowns, all of which came in the first half, as he helped lead Chelsea to... read more