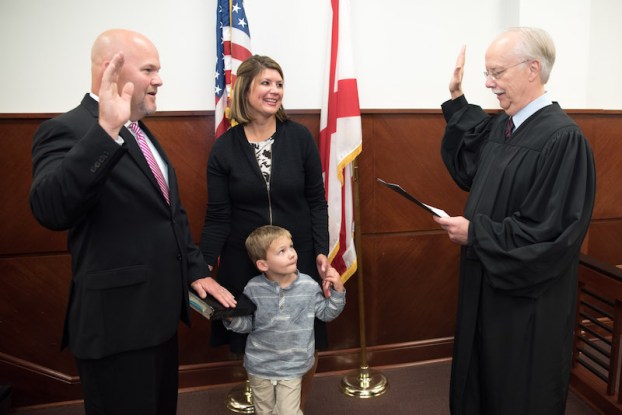 Corley Ellis was sworn into Alabama House of Representatives District 41 by Jim Furhmeister on Thursday, Oct. 20, with his wife and son by his side. (Reporter photo/Keith McCoy)

MONTGOMERY – The vacancy in Alabama House of Representatives District 41 has officially been filled by Republican Corley Ellis, who was sworn into the position by Shelby County Probate Judge James Fuhrmeister on Thursday, Oct. 20.

The seat became available when Mike Hill, R-Columbiana, was named superintendent of the State Banking Department.

“This is an exciting day obviously,” Ellis said. “It’s been a long-time coming waiting on the certification from the secretary of state, so we are very excited it’s finally here.”

Ellis has represented District 1 on the Shelby County Commission for the past 10 years and said he is looking forward to continuing to serve this great county.

Now he moves to Montgomery to work for House District 41, which is primarily contained in Shelby County and covers parts of the county that are south of U.S. 280 and east of Interstate 65.

“I’m humbled and honored that I get to continue my service to the people of Shelby County by going to Montgomery,” he said. “To continue that service in Montgomery is exciting.”

Independents had until Oct. 18, to declare their candidacy and with nobody contesting his campaign, he was automatically appointed to the seat and started the job on Oct. 20.

Ellis has spent several weeks over the past two months in Montgomery meeting most of the House members he will be working with and watching the process of bills moving through the legislation.

“It’s been very beneficial to see how the overall process works,” he said. “The state has a lot of issues facing it and I’m anxious to jump in and find where I can do the best.”

He said a large majority of those issues are with budgeting, Medicaid and prison reform.

“There are solutions for all of the problems we are facing, we just have to find out what they are and work together as a team to find those solutions,” Ellis said.

He mentioned being part of one of the largest county commissions in the state will help him when it comes to creating a team atmosphere and working with others.

“We have a really good legislative delegation here in Shelby County,” Ellis said. “I am proud to say they are all friends and I look forward to working with those guys.”

He does understand how challenging the job will be saying problems at the state level are more complex tasks, but the challenge is what excites him the most.

Ellis will meet with House Speaker Mac McCutcheon and others next week to get the lay of the land and start to get a better idea of which committees he might serve on.

By GRAHAM BROOKS / Staff Writer HELENA–With the way technology has constantly changed over the past 10-15 years, the Helena... read more