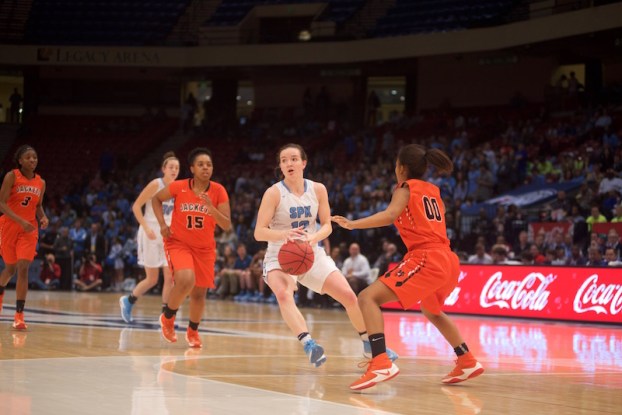 Jacob Rich, above, went 3-3 at the plate with two RBIs, which included a walk off hit to drive int he winning run. (Reporter photo/Keith McCoy)

Rich walk off leads Spain Park to win over Pelham

HOOVER – An extra inning dual between Spain Park and Pelham at Spain Park High School on Wednesday, March 8, came down to the bottom of the eighth inning with two runners on and nobody out.

Cue Jacob Rich, who was having an incredible game and came to the plate after back-to-back singles from Peyton Sanderson and Lane Willis to start the inning. After falling behind 1-2 in the count, Rich battled to a full count and on the sixth pitch of the at bat drove the ball to center field for a walk off double as Sanderson came home for the Jags’ sixth run of the game giving them a 6-5 win.

Spain Park outhit Pelham 13-6 and shouldn’t have even needed extras, but the Panthers played much better defensively limiting themselves to just two errors, while the Jags picked up five and it’s a big reason they fell behind early in the game.

In the top of the second inning, Garrett Stonicher hit a fly ball to left field and reached on an error by William Mee. Not only was Stonicher able to reach, but with the bases loaded, all three baserunners were able to make their way home to give the Panthers a 3-0 lead.

Pelham was able to add to that lead in the top of the third off of a single from Chris Williams. His single brought home Hunter Stowe, who was only able to score because of a wild pitch that moved him over to third.

With Spain Park in a 4-0 hole, they were going to have to find some offense and step up defensively, which is just what they did starting in the bottom half of the third.

Sanderson led the inning off with a double to start the Jags’ threat. After a strikeout from Willis, Rich came to the plate and picked up his second hit of the day on a single to center field that scored Sanderson to put Spain Park’s first run on the board.

The Jaguars were able to do most of their damage with two outs in the inning starting with a walk from Jake Dickinson, which was followed by a double from Will Battersby and a single Sam Dozier to drive in three more runs. It took just half an inning for Spain Park to erase the deficit at tie the game at 4-4.

They took their first lead of the game in the bottom of fourth thanks to a bases loaded walk to Dickinson. All things considered, the Panthers had to be happy that they had gotten out of the inning allowing just one run.

Pelham answered back in the top of the fifth thanks to a walk, a stolen base, a wild pitch and another error that brought home Noah Golden without a hit being registered.

Neither team threatened again until Spain Park strung together three consecutive hits to start the eighth leading to the walk off win.

Rich had a great day at the plate going 3-3 with one walk, one run scored and two RBIs. Battersby and Dozier both went 2-4 in the game with an RBI and two walks. Seven Spain Park batters got a hit, including four who had multi-hit performances.

Pelham was led by Kasey Clark, who went 2-3 with a double and one run scored.

Hartsfield and Holsombeck impress in win over Hoover

By ALEC ETHEREDGE | Sports Editor NORTH SHELBY – Just over a week after registering a complete game shutout of... read more