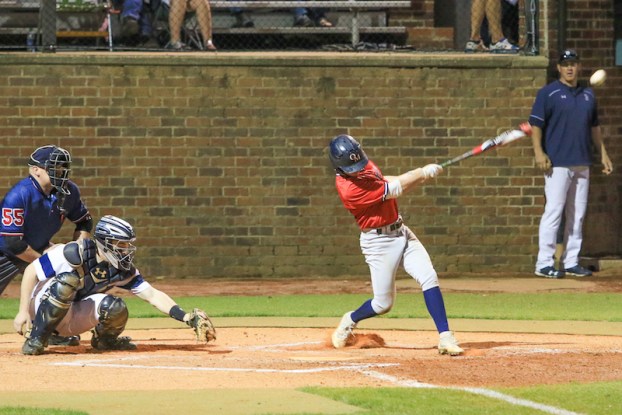 Oak Mountain had a strong night at the plate going off for 13 hits and six runs. (For the Reporter/Dawn Harrison)

Oak Mountain shuts out No. 1 Briarwood

NORTH SHELBY – A second inning surge and great stuff from Gene Hurst on the mound led to Oak Mountain shutting out 5A No. 1 Briarwood 6-0 on Tuesday, March 21.

The Lions have had one of the most potent offenses of the 2017 baseball season, which had led to just one loss in their first 15 games before running into the buzz saw known as Oak Mountain.

The Eagles handed Briarwood just their second loss of the season and ended their eight game winning streak thanks to strong defense and great pitching.

With the Briarwood offense being lost during the game, the difference maker was Oak Mountain’s second inning charge where they recorded eight of their 13 hits and five of their six runs.

Before the first out was even recorded, the Eagles exploded for five singles, a double and three runs. Garrett DeAraujo then hit into a fielder’s choice driving in their fourth run, which was followed by two more singles from Ethan Holsombeck and John McDonald to bring in their fifth and final run of the inning as they had batted around in the lineup.

One run was all the insurance Oak Mountain needed, but five was definitely enough as Hurst settled in and only allowed three more singles and four more baserunners the remainder of the game.

In the top of the seventh, McDonald added a sixth run for the Eagles on a deep bomb over the center field wall for a round tripper to put up the final score of 6-0.

Hurst not only had a strong performance on the mound, but carried it over to the batter’s box as well, going 2-2 in the game with two RBI, two walks and one run scored as he reached base on all four of his at bats. McDonald went 2-4 with his home run giving him an RBI and a run scored.

Only four Briarwood players picked up a hit in the game. Kolby Kwarinski was their only multi-hit performer as he went 2-3 in the game.