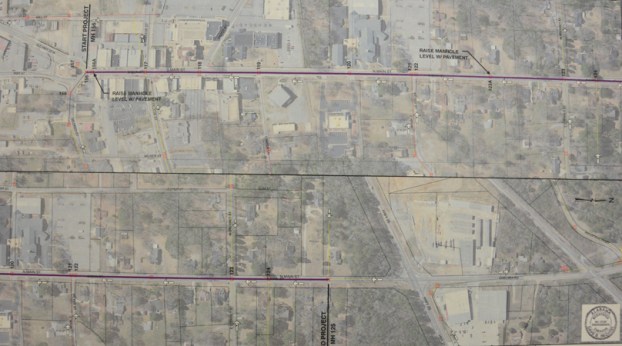 The purple lines on the map designate where the slip-lining project on Main Street will begin and end. This is the first of three projects related to the sewer system that the city plans to complete before 2018. (Contributed)

Waste Water Treatment Department Head Dale Lucas explained that slip-lining is a process where a tube made out of a soft material will be extended through the old sewer line. The tube will be steamed so it will harden to coat the inside of the sewer line.

“It will go from manhole to manhole through the existing pipes,” Lucas said. “There won’t be any joints, it will be one continuous pipe.”

Once the slip-lining process is complete on the main sewer line on Main Street, lateral lines from every residence and business on Main Street will also be slip-lined.

“This is to keep the streets from being expedited. About 200 lateral lines will be slip-lined,” Lucas said.

Handley said motorists can expect delays in the area, but traffic should be able to move through Main Street at all times.

“It’s going to disrupt very little traffic. The crews are only blocking one lane at a time, but we should never shut down the whole street,” Handley said. “The contractor agreed that if it does become an issue, they will work from 6 p.m. to 6 a.m. so as to not disrupt us.”

Handley also said there should be no related sewage issues at any of the buildings on Main Street.

The city contracted with BLD Services, LLC, of Kenner, Louisiana, to complete the first project.

The city also plans to replace the trunk sewer line that spans from Alabama 70 to Alabama 25 with a 24 inch pipe, which will connect to the new pump station at the Columbiana Environmental Services plant that the city is also planning to build. There are also plans to extend the sewer line behind the old Elastic Corporation building to accommodate future development.

“We are very grateful and thankful for this grant,” Handley said.

Handley said the projects are necessary to keep Columbiana’s sewer system as functional and clean as possible.

“A lot of our sewer lines are still terra cotta pipes. Over time, they tend to crush and allow ground water in them. The city is treating a lot more water than they need to be, because our sewer systems are so outdated. Some of the pipes we’re using now were put in during the ‘30s and ‘40s,” Handley said.

CHELSEA- The seventh annual Fire at the Foothills BBQ and Chili Cook Off will be held from 1 to 4... read more