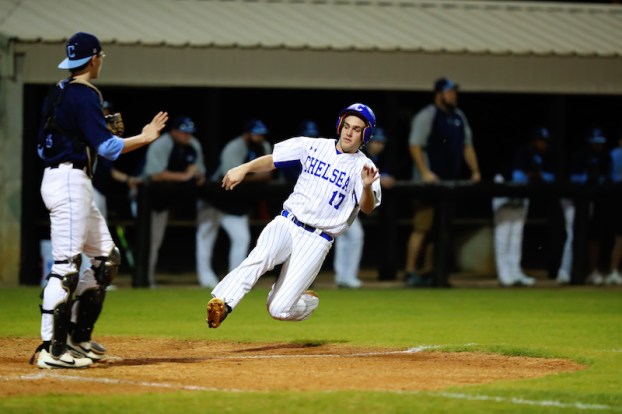 Josh Gregg was the hero in the rubber match of Chelsea's series with Northview after hitting a walk-off single to extend the Hornets season as they move on to round two of the playoffs. (For the Reporter/Cari Dean)

Hornet Heroics: Gregg hits walk off to send Chelsea to 2nd round

DOTHAN – Trailing 1-0 in a winner-take-all game and down to their last out in the bottom of the 7th inning in the first round of the playoffs against Northview High School, it looked like the Chelsea Hornets 2017 baseball season was coming to a close on Saturday, April 22.

With Scott Arnold on third and Clay DeWeese in a 2-0 hitter’s count, DeWeese hit a hard ground ball that the first baseman couldn’t handle, which allowed him to reach on an error and Arnold to come home for the game-tying run to force extra innings and give the Hornets some hope as they fought for their playoff lives.

Those late-inning heroics weren’t enough for Chelsea, however, as they were determined for their season to continue. After forcing Northview to go three-up-three-down in the top of the eighth and ninth innings, the Hornets came back to the plate with a chance to win.

They started the inning with a strikeout and a groundout, and it looked as if they weren’t going to be able to put together a threat. That changed when Tristan Sulser and DeWeese put together back-to-back walks. Both eventually moved over to second and third due to wild pitches, which all of a sudden brought Josh Gregg to the plate with two runners in scoring position.

The talk all year from head coach Michael Stallings has been can their bats help them win games. Gregg had one simple answer for his head coach, yes! In a 2-1 count, Gregg took the fourth pitch he saw and hit a line drive to right field that found the outfield grass for a walk-off single as Sulser crossed the plate with ease.

Gregg’s heroics not only kept Chelsea’s season alive, but sent advanced his team to the second round of the playoffs after taking the best of three series with Northview on the road.

After hammering the Cougars 9-2 in game one Friday night, Chelsea came back and lost game two in a closely contested 2-1 game later that night, which set up the win or go home matchup the following day.

While the Hornets bats fell asleep over the final two games of the series, their pitching was phenomenal only giving up a total of 17 hits and not allowing more than two runs in any of the three games.

The Hornets used three different pitchers in the rubber match as Emmitt Hudspeath, Gage and Connor Burnett combined to allow just six hits and one run while striking out four. Despite giving up a third-inning run, without their excellence on the mound, DeWeese nor Gregg would have had the opportunity to tie or win the game for their team.

In the decisive game at the plate, five different Chelsea players grabbed a hit, but only one had an RBI and that was Gregg’s season-saving single for the win.

Chelsea (25-12) now advances to the second round where they will play host to Benjamin Russell starting Friday, April 28. The Wildcats are 23-14 and took down Blount County by a combined score of 37-0 in a first-round sweep after wins of 22-0 and 15-0.

Clean sweep for Calera propels them to 2nd round

By ALEC ETHEREDGE | Sports Editor CALERA – It might have been the first round of the 2017 postseason, but... read more