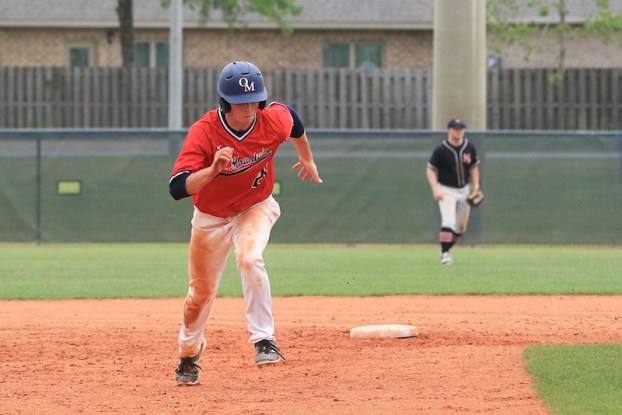 The Oak Mountain Eagles tied for their most wins in program history after winning 30 games during the regular season, a record they set last year. They'll try grab win 31 in the playoffs. (For the Reporter/Dawn Harrison)

GADSDEN – When Oak Mountain hired Derek Irons to turn around the school’s baseball program, I’m sure they had high expectations, but those expectations have been blown out of the water.

On Tuesday, April 25, Irons and his Eagle baseball team picked up an 11-0 win over Gadsden City to accumulate their 30th win of the 2017 baseball season. If that win total sounds familiar, it’s because that’s the historic number this Oak Mountain squad set last year marking their most wins in program history.

Now two years into the Irons tenure, the Eagles have set history and followed that up by matching it with back-to-back 30-win seasons for the first time in Oak Mountain’s storied baseball program.  Not only has he tallied a total of 60 wins in his first two years, which is just mind boggling, but Irons has also managed just 22 losses and now back-to-back playoff appearances after the team was absent from the postseason for four years prior to his arrival.

Now that his team is in the playoffs for the second year in a row, Irons and the Eagles have two tasks ahead of them as he and this senior class look to add a new chapter to the history books — get that 31st win in the playoffs and bring home a state championship.

Last year, the Eagles took out Vestavia in the first round before falling to Hewitt-Trussville in three games in the second round. This year, they have propelled up the rankings to find themselves as the No. 2 team in class 7A and have much loftier goals with a pitching staff that features aces like Gene Hurst and Joseph Hartsfield.

Their contest with Gadsden City shows just what type of Eagles team this is. They put up 17 hits, while giving up just three on their way to the 11-0 win. It wasn’t just one pitcher that allowed those three combined hits, but five, and it clearly wasn’t just one batter who picked up 17 hits, but nine, including five with multi-hit performances showing the kind of depth this team has, which is key to a postseason run.

Oak Mountain scored runs in every inning from the third through the seventh on their way to the shutout as five players had doubles during that span.

Ethan Holsombeck led the team going 3-5 at the plate with three RBIs and two runs scored, while John McDonald and Hartsfield also had three-hit performances.

The Eagles will now shift their focus to Friday night when they host Huntsville High School in the first round of the playoffs. A doubleheader is scheduled with games at 4:30 p.m. and 7 p.m. An if necessary game would be the following day at 1 p.m.

Oak Mountain ended the regular season 30-8 and as a strong favorite to bring home the 2017 7A state championship.

By ALEC ETHEREDGE | Sports Editor CHELSEA – Anytime a high school athlete signs a letter of intent to be... read more