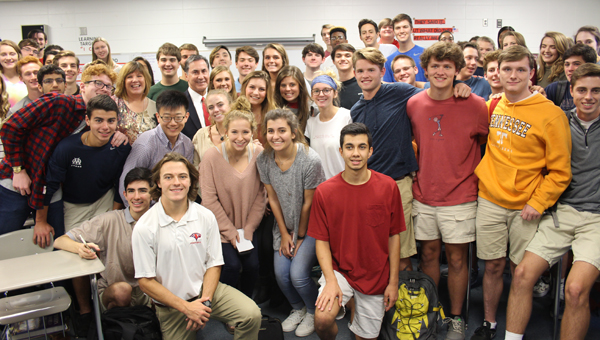 Oak Mountain High School, shown during a visit from Congressman Gary Palmer, was one of four high schools in Shelby County among 29 in Alabama that received Silver Medals in the Best High Schools rankings compiled by U.S. News & World Report. (FILE)

Six high schools in Shelby County were ranked among the best in Alabama by U.S. News & World Report.

The U.S. News rankings include data on more than 22,000 public schools in 50 states and the District of Columbia. Schools were awarded gold, silver or bronze medals based on their performance on state assessments and how well they prepare students for college.

A four-step process determined the Best High Schools, according to U.S. News and World Report.

The first three steps ensured that the schools serve all of their students well, using their performance on the math and reading parts of their state proficiency tests and their graduation rates as the benchmarks.

For those schools that made it past the first three steps, a fourth step assessed the degree to which schools prepare students for college-level work.

COLUMBIANA – On Wednesday, May 3, the Shelby County Drug Enforcement Task Force made its third arrest within one week... read more