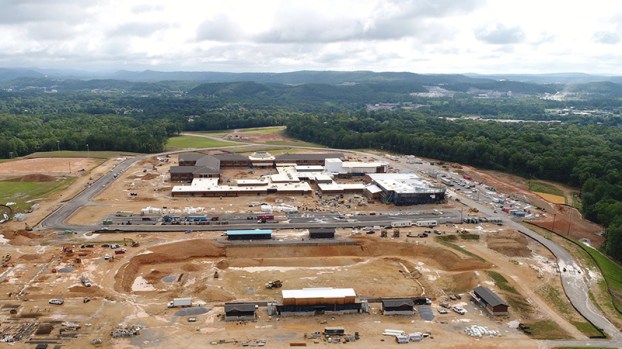 Crews soon will begin work on adding center turn lanes onto Kent Dairy Road and Thompson Road to handle traffic traveling into the city’s new high school campus after the city’s Board of Education approved funding for the project on June 28. (Contributed/Kevin Henderson with Skybama.com)

ALABASTER – Crews with a local construction company soon will begin work on adding turn lanes onto Kent Dairy Road and Thompson Road to handle traffic traveling into Alabaster’s new high school campus, after the city’s Board of Education approved funding for the project during a June 28 special-called meeting.

School Board members voted unanimously during the meeting to award an about $1.3 million bid to the Chilton Contractors company to add the center turn lanes onto the two roads. Alabaster City Schools is working with the Shelby County Highway Department on the project, ACS Superintendent Dr. Wayne Vickers said previously.

Vickers said the $1.3 million bid came in lower than the school system had budgeted for the project.

Much has changed from 1776 to 2017, but local history teachers make sure the importance and ideals of our country’s... read more