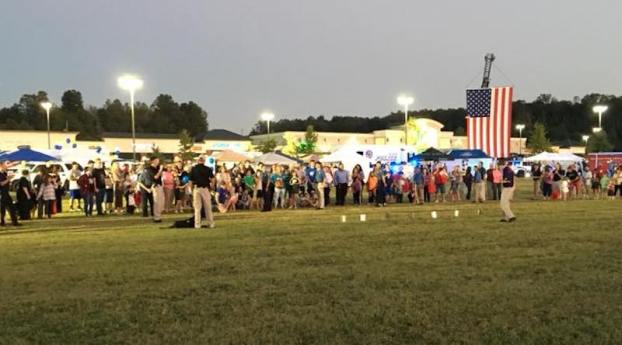 PELHAM – The Pelham Police Department recently celebrated its first independently held National Night Out event in front of the Publix at the Pelham Towne Center on the evening of Thursday, Oct. 5. PPD Community Relations Coordinator Ainsley Allison said Pelham’s Night Out served to strengthen relationships between the community and local police officers.

“(People) got a chance to meet our police officers up close and personal. They had really good conversations,” Allison said. “A lot of people, when they meet the police, are having an emergency or getting a ticket. It was a good chance for officers to talk with people about nice things.”

In the past, Allison said PPD had participated in the Alabaster Police Department’s National Night Out and chose to host its own to better connect to Pelham residents.

“This was all (PPD Chief) Larry Palmer’s idea. He felt it was time to bring National Night Out to Pelham,” Allison said.

During the event, visitors were able to explore first responder vehicles from the PPD and other county law enforcement agencies, including a Pelham Fire Department fire truck that was painted pink for breast cancer awareness and the Shelby County Sheriff’s Office patrol helicopter

For its first event, Allison said the Pelham Night Out received a sizeable turnout.

“The turnout was fantastic,” Allison said. “We anticipate that we had maybe 1,800 to 2,000 people attend based on the amount of food we gave out.”

Allison said she especially appreciated how many people attended right after the Pelham City Schools homecoming parade, which was unwittingly scheduled shortly before National Night Out.

“That night showed a real sense of community,” Allison said. “Our community found a way to support both our students and our first responders.”

Allison marked the first Pelham Night Out as better than anticipated and said she looks forward to hosting a bigger, better event next year.

“We tried to keep it small because it was our first one,” Allison said. “I have a really good feeling about next year. There’s really only one way to go, and that’s up.”