The Rev. Sammie and Mrs. Bobbie Adams Nelms renewed their marriage vows on Saturday, Nov. 4, 2017, at Ward Chapel A.M.E Church in Bessemer, Alabama, where he serves as pastor.

They were married in Columbiana, Alabama, on Nov. 4, 1967. The ceremony was officiated by their children, the Rev. Alice Nelms Cato and the Rev. Terrence Cato Sr. 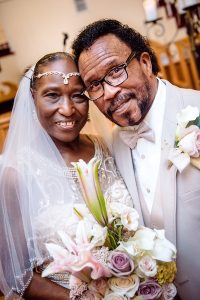 The bride was escorted by their grandson, Terrence Cato II, and given in marriage by their children.

She wore an organza taupe gown adorned with beads, and carried a bouquet made of cream and pink roses. The bride wore an ivory scalloped-edge veil with beads.

Following the ceremony, the couple invited their guests to join them in a reception at the Pelham Civic Complex located in Pelham, Alabama. Pelham Mayor Gary W. Waters presented the couple with a proclamation from the city proclaiming Saturday, Nov. 4, 2017, as “Sammie and Bobbie Nelms’ Day.”

They have four children: Samuel Lee Nelms and his wife Jalete of Birmingham, Alabama; Barbara Nelms Green and her husband Daryl of Ft. Washington, Maryland; James Earl Nelms of Pelham, Alabama; and the Rev. Alice Nelms Cato and her husband, the Rev. Terrance Sr. of Cincinnati, Ohio.

The couple have lived in Pelham, Alabama all of their married life.

By GRAHAM BROOKS / Staff Writer Helena resident Lisa Spencer said it was like a light was shining down the... read more