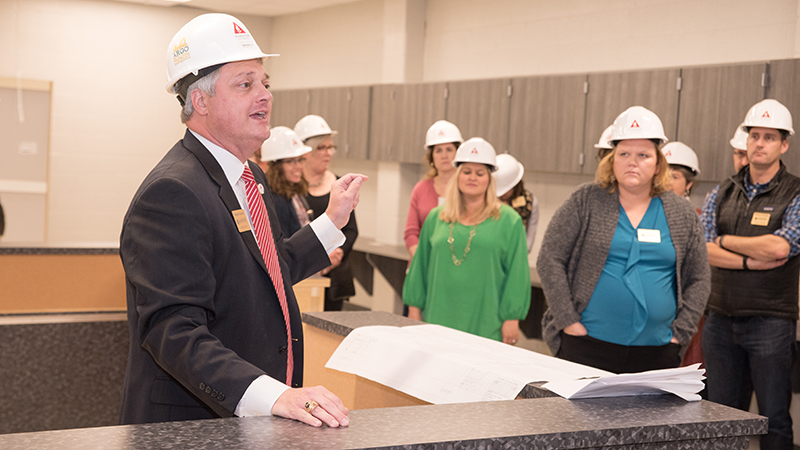 Alabaster School Superintendent Dr. Wayne Vickers, left, guides a Leadership Shelby County class through the main office in the city’s new high school during a recent tour. The city’s Board of Education voted to name the roadway for the new school during a Nov. 28 meeting. (Reporter Photo/Keith McCoy)

ALABASTER – The road leading to Alabaster’s new high school will have a familiar name, after the city’s Board of Education voted to name the roadway during a Nov. 28 special-called meeting.

School Board members voted unanimously during the meeting to name the road Warrior Parkway in honor of the school’s mascot. The roadway will run from Thompson Road to Kent Dairy Road, serving the high school and all of its athletic facilities.

The roadway naming came during the same meeting several of the school construction contractors told Board of Education members they will have the school ready to house students when they return from the Christmas break on Jan. 4.

The state building inspector is set to tour the building in mid-December, and crews are working to ensure the building is ready to pass inspection by then, project manager Jonathan Grammer with the Volkert engineering company told School Board members. He said the main items to be installed before the inspection are the life safety systems, such as the fire alarms and sprinkler system.

The performing arts auditorium, indoor arena and sports facilities will not be completed by January, but construction workers will enter the campus from the Kent Dairy Road entrance, will use a separate parking area and will be segregated from the students until those areas are completed, Grammer said.

During its Nov. 13 meeting, the School Board voted to award a $67,500 bid from the Lambert Transfer and Storage company to move items from the old school to the new one while students are out for the Christmas break in December.