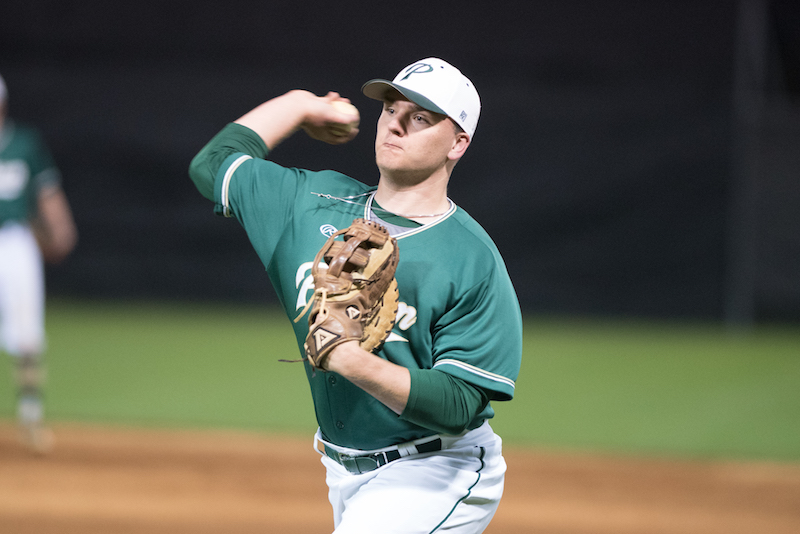 Mitchell Rottier tossed seven innings and had a strong game at the plate for Pelham as they knocked off rival Thompson. (Reporter photo/Keith McCoy)

ALABASTER – The Pelham-Thompson rivalry is a special one and one that neither team wants to lose—a point that was proven on Tuesday, March 13, when the two met on the diamond and battled in a 10-inning extravaganza at Thompson High School.

Despite outhitting the Panthers 11-7 and holding a 4-3 lead heading to the final inning, Pelham landed the final punch in a back-and-forth affair in the top of the 10th inning thanks to three runs crossing the plate for a 7-5 extra-inning win.

Trailing 4-3 heading into the top of the seventh inning, Pelham (8-5) mounted a comeback and it started with a Mitchell Rottier single to lead off the inning.

After a well-executed sacrifice bunt moved him into scoring position, an error put Kasey Clark on board and allowed Rottier to move over to third.

Despite not picking up another hit the rest of the inning, Will Pierce was able to hit a ball deep enough to center field to bring Rottier home for the game-tying run on a sacrifice fly to force extra innings.

The first two innings of extra play were quiet with neither team getting a good chance to win the game.

Pelham, however, reverted back to its seventh-inning self in the top of the 10th inning.

The Panthers didn’t pick up a single hit in the inning, but thanks to three consecutive walks by Hunter Stowe, Garrett Stonicher and Hunter Hall, they were able to load the bases with just one out.

An error by second baseman Myles Brown not only allowed Carter Reid to reach base, but also brought in Stowe to break the tie and give Pelham a 5-4 lead.

Rottier and Jackson Weaver struck out and flew out, respectively, during the next two at bats, but a wild pitch during Rottier’s at bat and a passed ball during Weaver’s at bat allowed Stonicher and Hall to score for a 7-4 lead heading to the bottom half of the inning.

Thompson (6-6) gave a run at tying the game in the bottom of the 10th with a Breydon Edmondson double and an RBI-single from Sawyer Pate to make the score 7-5, but that was as close as the Warriors were able to get.

The back-and-forth part of the game started in the top of the second inning when Pelham struck first with two runs on an RBI-single from Reid and a wild pitch that allowed Seth Thomas to score.

In the top of the fourth, the Panthers added to that lead with an additional run. Stonicher and Thomas led the inning off with a double and a single, respectively.

While it could have been a more damaging inning, Pelham was able to add one run on a sacrifice fly to take a 3-0 lead.

In the bottom of the fourth, Thompson’s offense finally woke up. With one out in the inning, Nick Freeman, J.C. Parker, Edmondson, and Chris Miranda were able to lace singles, while Grayton Arrington was hit by a pitch. All of that action led to two runs to get within a run at 3-2.

The Warriors carried that over into the fifth inning when Josh Huner and Nick Freeman both singled and Myles Brown reached on an error to load the bases with one out.

Pelham only allowed one run to score, however, as Parker hit a sacrifice fly that brought Huner in for the game-tying run.

Thompson was able to score for the third consecutive inning when Pate doubled to right field to bring Stonicher in for the go-ahead run. The Warriors had battled back from a 3-0 deficit with four unanswered runs to take a 4-3 lead.

That’s when Pelham finally answered in the top of the seventh when it mattered most to tie the game and eventually win in extra innings.

Rottier ended the game going 2-for-5 at the plate to lead Pelham, while also adding an RBI and one run scored. Reid had a 1-for-5 day with three strike outs, but he led the team with two RBIs. In all, six different players picked up a hit for the Panthers, while three had RBIs.

Freeman went 3-for-5 at the plate with a run scored to lead Thompson. Edmondson and Pate both went 2-for-5 with two RBIs, while Miranda was 2-for-5 with one run scored.

Parker tossed the first seven innings of the game and ended his night with a game-high nine strike outs.