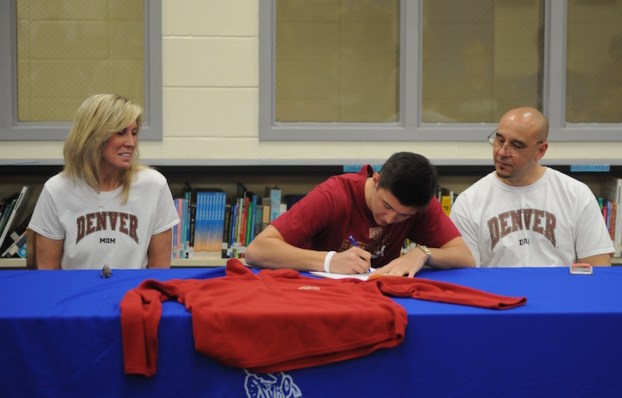 Former Chelsea standout Joseph Lanzi became the Hornets' first ever player to sing a Division I school after inking with the University of Denver. (Reporter photo/Alec Etheredge)

CHELSEA – Basketball is a sport that requires hard work, dedication, leadership, determination, a lot of skill, some luck, great agility and a love for the game – all things that describe Joseph Lanzi.

The former Chelsea basketball standout became the first Hornet player to ever sign a Division I college basketball scholarship when he inked with the University of Denver in front of family, friends, coaches and former teammates at Chelsea High School on Thursday, April 12.

“I’m so excited for him and this is well deserved,” said Chelsea head coach Nick Baumbaugh. “His hard work has finally paid off. I know he’s had a goal for a long time to play at the college level and he’s finally getting that chance.”

After a strong career with the Chelsea Hornets that featured several school records, Lanzi went to Hillcrest Prep in Phoenix, Arizona for one year to try and prove he had what it took to compete at the Division I level and it didn’t take long for schools to catch on to the blooming talent Lanzi offered.

He ended up receiving offers from four different Division I schools including the Naval Academy, Air Force, Texas Rio Grande Valley and the University of Denver.

“There have been long nights where I didn’t know what I was going to do about college,” Lanzi said. “But my parents were always there for me to lend me a helping hand. I wouldn’t be where I am without them.”

This past season, Denver finished 15-15 overall and fell in the semifinals of the Summit League tournament, which put them a game away from trying to grab a spot in the NCAA tournament.

Lanzi will look to help the team take the next step and he has the track record to make it happen.

At Chelsea, Lanzi set school records for points in a season with 529, 3-pointers made in a single game with eight, field goals made in a career with 192 and most wins by any player in school history with 55.

Lanzi was the team captain his junior and senior season and led the Hornets to back-to-back area championships and regional tournament appearances in 2015 and 2016.

He was also named to the Shelby County first team during his senior season in which he averaged 17.1 points, 3.7 rebounds, 2.1 assists and 1.8 steals per game. Lanzi was a member of the all-area team his junior and senior seasons and was named MVP of the UMS-Wright Christmas Tournament his senior season.

“I know the time he has put in before school, after school and during the summer,” Baumbaugh said. “Everything has led to this point for him. Every single part about this day is really, really exciting for Chelsea, himself and his family.”