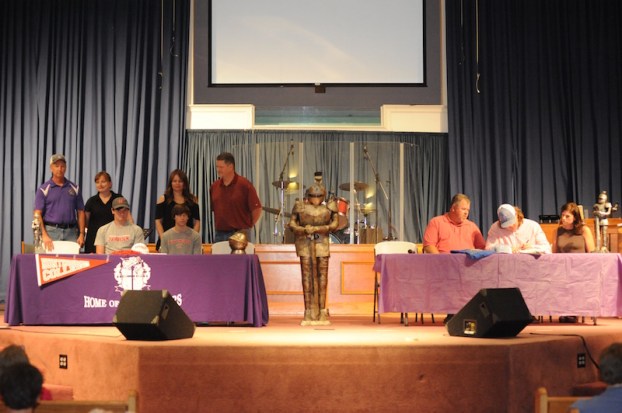 COLUMBIANA – It was a special day for Cornerstone Christian School on Tuesday, May 16, and one that set the standard for the program moving forward.

Out of a senior class of eight players, three of those eight signed scholarships on Tuesday to continue playing sports at the collegiate level.

Landon Guy is going to play football at Faulkner University, while Ben Perryman and Ethan Cohen are both headed to Huntingdon College. Perryman will be playing football, while Cohen will continue his basketball career.

“We’re just extremely proud of them,” Athletic Director James Lee said. “They’re all a success. You’re seeing dreams come true. It’s my job as a coach to help their dreams come true. They tell you their hopes and dreams and you just want to see it come true. Today is that fulfillment.”

While it was a special day for those three, seven of the eight seniors on the football team were heavily recruited, but four decided to take scholarships academically to do other things, while Austin Matzke will focus on his racing career.

“Any one of those other kids could have singed as well,” Lee said. “Them going on to do academic things in college is just as important.”

Lee praised being part of a smaller school like Cornerstone because he said he feels like he has gotten so much closer to these kids and really has gotten to talk with them and figure out exactly what they want out of life.

“We want to be that school that if you have a dream and want it fulfilled, we want to be the ones that fulfill it,” he said. “If it’s to play basketball, baseball, football or do track. We don’t want to just be the little school where kids come to play, we want to help them achieve their goals and make their dreams come true.”

Speaking of just Guy, Perryman and Cohen, Lee knows how successful each one will be.

“Landon, Ben and Ethan are all three going to be very successful,” he said. “Ben is a freak athlete, Landon is a prototypical lineman that belongs on a Division I team and the sky is the limit for Ethan in basketball because his heart and determination is unheard of.”

In addition to football, Perryman is also going to try and play baseball at Huntingdon as well.

“He’s got that kind of capability,” Lee said. “He’s that good of a baseball player to play two sports at the next level, but I don’t think he’s ever realized how good of a football player he actually is.”

Lee thinks the most important thing to come of the day aside from the celebration is what this group has done for the future of Cornerstone athletics.

“Their work ethic has laid the path for the kids coming up under them,” he said. “Now we even have eighth graders that are seeing the success of these three guys that have come up to me and said ‘Hey coach, I want to go play college ball, what do I need to do to make that happen?’”

Lee said it’s changing the entire mentality at Cornerstone and he can’t wait to see how the positive day on Tuesday impacts the future at the school.

By ALEC ETHEREDGE | Sports Editor PELHAM – When she stepped down from role of head coach of the softball... read more