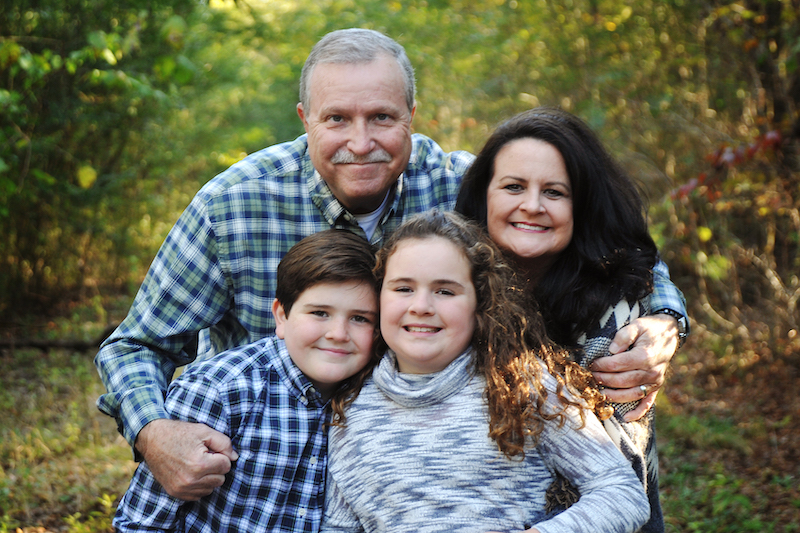 Jeff and Julia Vaughn of Helena with their children, Garrett, 10, and Julia, 12, are advocates for the Arthritis Foundation. The mother was diagnosed with rheumatoid arthritis, and both children have a juvenile form of the disease. (CONTRIBUTED)

HELENA—Julia Vaughn of Helena grew up with a lot of pain, never really knowing the true cause. But nothing could have prepared her for finding out that not just one, but two of her children had a juvenile form of arthritis—a discovery that would not only shed light on her own diagnosis but would ultimately unite the family to become advocates for others like themselves.

Julia’s childhood was not unlike that of most children—she participated in several sports, including softball, field hockey, tennis and cross-country. On the surface, everything might have seemed normal—but underneath there was always the pain.

“Lots of struggles, lots of tape” is the way she describes it.

“I just remember being tired all the time and not feeling good. It was like a fight to be active and do sports,” she said.

There was pain in her ankles, knees and hips—the kind of pain and stiffness most would associate with older people.

“They told me it was growing pains,” she said.

At age 40, Julia was diagnosed with rheumatoid arthritis (RA), an autoimmune disease in which the body’s immune system attacks the joints, causing inflammation that results in joint pain, swelling, fatigue and other symptoms. The inflammation can even occur in the neck, causing severe headaches.

“I typically make it through the day until about 2 or 2:30, and then I’m in bed. I have to take medicine, and then I lie down. A flare up can really take you out all day or weeks, literally,” she said.

During a summer 2009 trip to her sister’s Connecticut horse farm, Julia noticed that her then 2-year-old daughter, also named Julia, was limping. Thinking that “Little Julia,” as she is often called, had twisted her ankle while out in the barns, Julia initially didn’t worry too much. A few months later, however, when her daughter was sitting on the coffee table in front of her watching TV, she noticed something that alarmed her—Little Julia’s left ankle was much larger than her right.

“It was swollen. There was no definition to the ankle; it was huge,” Julia recalled.

She called the family pediatrician, who performed several blood tests and referred the family to a pediatric rheumatologist at Children’s Hospital. At Children’s, the initial diagnosis was confirmed—juvenile idiopathic arthritis (JIA).

“We were shocked,” Julia said of the initial diagnosis.

An Internet search provided little comfort, as searches for juvenile rheumatoid arthritis turned up the worst possible images. This only added to Julia’s initial feelings of denial and guilt—the latter coming from the feeling that she had passed the disease down to her daughter.

For the first three months following the diagnosis, Little Julia took Prednisone, Naproxen and weekly Methotrexate injections. Unfortunately, this did not prevent the arthritis from moving into other joints. She was then prescribed an additional two shots per week (one in each hip) of Embrel, making quarterly trips for bloodwork and eye exams.

Multiple imaging tests were ordered, which showed that her bones and joints were developing properly; however, an MRI on her ankle confirmed a second diagnosis—enthesitis, or inflammation of the tendons.

Like her mother, Little Julia didn’t let arthritis hold her back—she loves swimming, cheerleading, baseball, dance and horseback riding. While taking a break from sports this year, she continues to play clarinet in her school’s band.

“Little Julia just turned 12, and has definitely experienced challenges, but we are so thankful that her juvenile arthritis was detected early and that her doctors were aggressive with treatment. She still has some hard and painful days, but she pushes through like a champ,” Julia said.

As a mother, Julia’s ongoing focus is to teach her daughter to speak up for herself when she’s hurting—for example, being able to tell her coach at school that she needs to sit out of a particular activity, or telling a teacher she needs her medication. This is important because most symptoms of arthritis do not present themselves visually.

But Little Julia’s attitude is encouraging:

“One thing I want everyone to know about having arthritis is that, even when you are hurting, to always believe in yourself and never stop what you love doing,” she says.

It was not until eight years after Little Julia’s diagnosis that then 9-year-old Garrett started to show signs of the disease. He had been complaining of pain in his heels, but this was later determined to be his ankles.

About a year into playing basketball, Garrett started having problems running across the court. Suddenly, he couldn’t keep up with the other players. It all came to a head one morning when a severe pain in his knee immediately brought him to the floor.

“My big, strong boy had to slide down the stairs to get me, and after taking one look at his melon-sized knee, I knew that he, too, would soon be diagnosed with juvenile arthritis,” Julia said. “I took him to see his pediatrician several times, and each time he couldn’t find anything wrong, so we used Tylenol and heel lifts to help with the pain. It would come and go and honestly, I didn’t think both my children could have JIA. I learned a few short months later, when Garrett woke up with his knee so swollen he couldn’t walk, crying in severe pain, that I was wrong.”

Fortunately, it only took a day to see the pediatric rheumatologist. Garrett received his first cortisone injection at Children’s Hospital.

“The rheumatologist wanted to try and get fluid removed from his melon-sized knee, but due to the pain, it wasn’t feasible,” Julia said.

Recently, pain started affecting both of his knees, ankles and all of his fingers. He started Methotrexate in September and has to take Zofran to ward off the nausea from the Methotrexate; it is still too early to tell how effective the medications will be, but the family remains hopeful.

Both of the Vaughn children have oligo arthritis, enthesitis and uveitis. Oligo arthritis is when four or fewer joints are affected within six months of diagnosis. Uveitis causes inflammation of the cells inside the eye, which, if left untreated, can lead to blindness.

“Thanks to our pediatrician and rheumatologist, both Little Julia and Garrett were diagnosed early, which has saved them from serious, long-term joint damage,” Julia said.

As a member of the Arthritis Foundation’s Birmingham-area Board, Julia is working to raise awareness and funding for RA and JIA. For seven straight years, the family has teamed up for the Foundation’s annual Jingle Bell Run—the family’s team is named “Vaughn’s Avengers.” Last year, Little Julia was the Run’s junior honoree.

“It’s such a huge volunteer base to get these things done,” Julia said. “I’ve just been throwing myself into the Arthritis Foundation, because I feel like I’m finally doing something for myself, for my daughter, for my son.”

She is co-chairing the Foundation’s 2019 Bone Bash, which is making a return after 10 years. The fundraiser, which features a dinner, auction and entertainment, will take place Oct. 17 at the Barn at Shady Lane in Bessemer at 6 p.m. For more information or tickets, visit Arthritis.org/bonebashbirmingham.