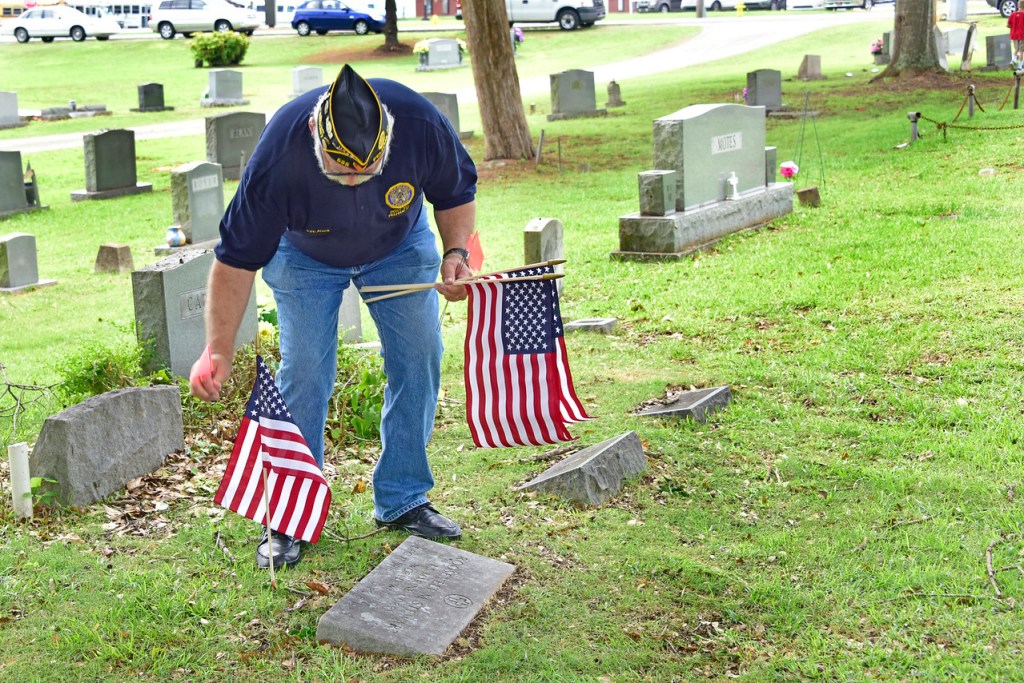 Sons of the American Legion 1st Vice Commander John Atwell places flags at the Pelham Cemetery to recognize veterans who are interred there. (Contributed)

PELHAM — A group made up of different organizations is putting together a list of veterans who are buried at the historic Pelham Cemetery.

The American Legion Matthew Blount Post 555, along with the Sons of the American Legion and Boy Scout Troop 404, started the project in order to recognize each veteran with a flag on Veterans Day and other special days year-round.

It started a couple of years ago when Post 555 Commander Kenneth Paschal noticed Pelham Mayor Gary Waters placing flags at different grave sites in the cemetery.

“We have about 70 veterans that are buried there,” Paschal said. “Up until a couple of years ago, nobody knew that except the mayor. We took it upon ourselves to make this an annual project and to engage the community and the youth.”

Since their founding in 2017, Boy Scout Troop 404 has partnered with Post 555 on several projects, including the placing of flags, said Committee Chairman Chris Combs, a member of both groups.

“The boys are always eager to help,” Combs said. “We teach the Scouts the importance of patriotism and citizenship in the community. This event does both.”

According to Paschal, the audience on Veterans Day has grown each year since the project started. The group’s goal is to honor the veterans year-round, not just on the holiday.

Paschal told the story of a woman who happened to be at Pelham Cemetery on one of the days when flags were being placed. The woman expressed her thanks to the volunteers and became emotional when she saw what they were doing.

“It really made a major impact on her to know that there are people in the community who care as much as she does,” he said.

Anyone who has a loved one buried at the cemetery who is a veteran, or who might know of any unmarked veterans’ graves, is encouraged to contact the American Legion at 205-678-1375.

Pelham Mayor Gary Waters also weighed in on the effort:

“By virtue of being unknown or unmarked, some of the veterans laid to rest in the Pelham Cemetery have not been recognized for their service and commitment to our country on Veterans Day for over 100 years,” Waters said. “This project provides the opportunity for the community to honor all of the veterans on the upcoming Veterans Day and for those to come.”