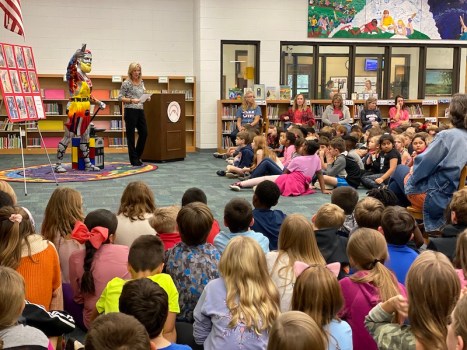 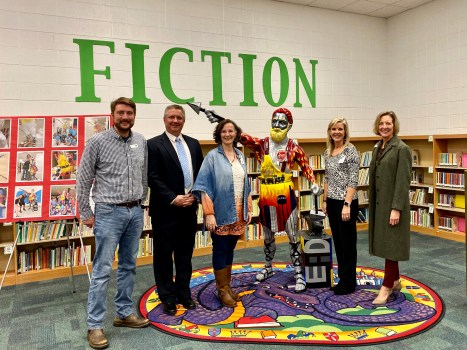 Oak Mountain Elementary School third graders, along with representatives of Vulcan Park and Museum, the Vulcan Junior Leadership Board, faculty members, city officials and more gathered Oct. 25 for an unveiling of the school’s contribution to the Vulcans on Parade project. The mini replica of Vulcan was completed by art teacher Carol Popwell and will be a permanent fixture on school grounds. (Contributed) 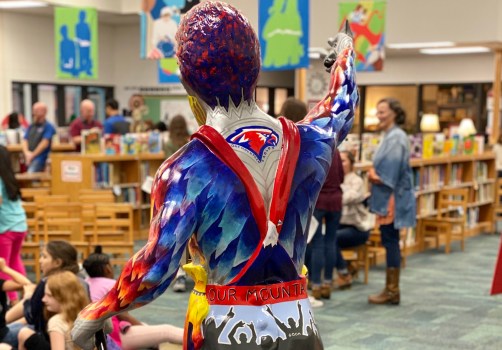 A new miniature Vulcan stands proud on the grounds of Oak Mountain Elementary School as part of a project with Vulcan Park and Museum.
The replica is one of several “Vulcans on Parade” which are found at different locations throughout the Birmingham area. Each statue is painted by a different artist using an original design that pays tribute to Birmingham’s rich history and culture.
OMES third graders gathered Friday, Oct. 25 for an official unveiling of the artwork, which was completed by art teacher Carol Popwell. Accompanying them were representatives of Vulcan Park and Museum, the Vulcan Junior Leadership Board, school officials, faculty members, city officials, family and friends.
“It’s all about promoting art and culture within our city and doing that with our main symbol, which is Vulcan,” said Kimberly Florence, marketing coordinator with Vulcan Park and Museum. “It was a really nice community effort.”
The project took about a year to complete. During the school year, OMES third graders went on field trips to Vulcan and Sloss Furnace and studied about Birmingham’s founding as part of the year’s curriculum. Now, the mini-Vulcan on school grounds will remind them of what they learned while helping them to honor their school, city and community.
The statue at the school is titled “Leadership Starts Here” and points toward the school’s students as future leaders of their community and beyond. The designs on the front represent the city of Birmingham with images of steel beams, the railroad, Sloss Furnace and stars (referencing the song “Stars Fell on Alabama”). Across the chest is displayed an image of the state and “Heart of Dixie,” while his arms are covered in flames that turn into wings on the back.
The statue’s back design represents the community of Oak Mountain and proudly displays the Oak Mountain Eagle, a silhouette of students and the local saying, “Our Mountain.”
Finally, the statue’s pedestal shows its title, “Leadership Starts Here” above the school’s letters as another silhouette of students heads toward the school.
The Vulcan on Parade will be installed in front of the school facing the carpool line so members of the community can see him as they visit the school. It is the first Vulcans on Parade project hosted at a K-12 public school.
“Everyone will be able to see it as they drive up to the school,” Florence said.
Vulcans on Parade is a community art project led by Vulcans Junior Leadership Board. It began as the brainchild of a team of young professionals participating in the 2015 Project Corporate Leadership class. This program brings together young, local leaders to learn how to become more involved in the community and to focus on becoming leaders of tomorrow.
For more information, go to Visitvulcan.com/Vulcans-on-parade/.