Genetta “Jett” Strong and Leo Percy Lowery, both with November birthdays bringing them to 95 years old, celebrated at a big birthday party given by their respective families at the Kingwood School Sanctuary on Saturday, Nov. 2. 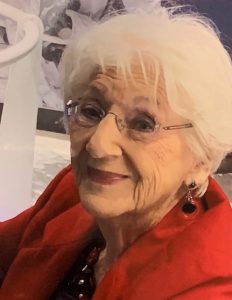 Those given invitations were locals from Alabaster as well as families and friends from Florida, Georgia, Illinois, Mississippi, Missouri, and Virginia with approximately 150 in attendance.

Strong was born Nov. 12, 1924 in Bonne Terre, Missouri and attended all 12 years of school in that Lead Belt Area, graduating from Bonne Terre High School in May of 1942. In her junior and senior years, she worked in the school NYA Program making U.S. Army comforters and mattress covers for the World War II effort.

She joined thousands of young women across the United States who kept the country’s manufacturing plants in production of necessary products to help this nation’s military. This contingent of the labor force during the years 1941-1945 was later named “Rosie The Riveter” Work Force, which now with Chapters across America, was founded by Dr. Fran Carter of Birmingham. The “Rosies” are the honored women who worked in nontraditional roles to become the backbone of America’s support while men were serving in all branches of the military services.

Married to O. J. “Bud” Strong in her hometown on June 28, 1942 and spending six weeks with him in Childersburg, Alabama while he worked as an electrician with the International Brotherhood of Electrical Workers (IBEW) Union 136 in Birmingham. They received his draft notice to the U.S. Army as a military policeman with an ultimate transfer to Denver, Colorado.

Strong worked at a Defense Plant Machine Shop Office there until Bud received an agricultural discharge to return to Bonne Terre to his father’s farm in support of feeding a nation at war. At the war’s end, the couple came back to Alabama to start their family in 1950. Their children are Joy, Jim and twins, John (deceased) and Lela (Michael) Vaughn.

Traveling extensively throughout the United States with the family in tow, the Strong’s settled in Alabaster in 1972 and joined the First Assembly of God of Alabaster, which later was renamed Kingwood Church. In every state traveled, Strong joined the Women’s Aglow International Organization made up of women and now men, as well, of every denomination and non-denominations in over 200 nations.

Jenna Strong and one great granddaughter, Zaelyn Vaughn honored her by inviting to the party those known to her throughout her life.

Strong said she loves “being a Spirit-filled Christian Living the Good Life.” Her most important contribution is “praying for souls, believing John 3:16 of the Holy Bible.”

She believes that Jesus is coming soon and doesn’t want anyone to miss this great event. Strong prays for God to bless and keep his family and this nation.

Lowery was surprised at Strong’s party with the celebration for his own 95th birthday. The party was planned from the start as a covert birthday celebration for Percy with full knowledge of family and friends. It worked. Percy did not know that he was sharing the limelight with Strong until family members and pictures of him appeared in the venue as he walked in. All present were delighted to attend the party for both 95-year-olds.

Lowery was born in Helena on Nov. 7, 1924 and attended school there. He joined the U.S. Navy in 1942, when America entered World War II, with a tour completion in 1945. While attached to the Navy, he completed his high school equivalency and was stationed on the U.S. Battleship, USS Tennessee, which was assigned to the South Pacific Theater in the United States’ effort to war against Japanese aggression.

After the war, he returned to Helena and met Mary Louise Ray in Thompson’s Chapel Church, which he attended regularly. He played the guitar and sang with the congregation. He and his wife were married in Jemison on Sept. 29,1951 and their son, Leo Steven Lowery, joined the family in 1952. Lowery found work in Birmingham at Chicago Bridge and Iron Industries, where he worked for 35 years. The Lowery family moved to Alabaster in 1958 and joined the First Assembly of God, later named the Kingwood Church.

Within that time, Lowery also worked at Baunete Mills in Vincent as a “spinner,” spinning bundles, which made cloth. He traveled for CB&I with the family throughout the Southeastern part of the United States until 1983 when the steel industry began to falter. He took an early retirement at age 65. He has been retired for 36 years supporting and the Alabaster community and his Kingwood church family for 61 years. Leo and Louise are members of the “Nifty Fifties” seniors group and participate in many events with their friends.

Lowery’s son Steve, daughter-in-law Willete, grandson, Keith, and his wife, Carrie Lowery, of Georgia and great, grandchildren and great, great grandchildren, joined the party crowd to joyously celebrate. Lowery is still loving and leading a model Christian life. Lowery, who stands for his God, family, friends, and nation, is beloved by those who know him.

New Alabaster eatery Birds and Burgers off to a good start

ALABASTER – At Birds and Burgers, owner Tyre Stuckey’s goal to is to serve his customers real food, fast. The... read more