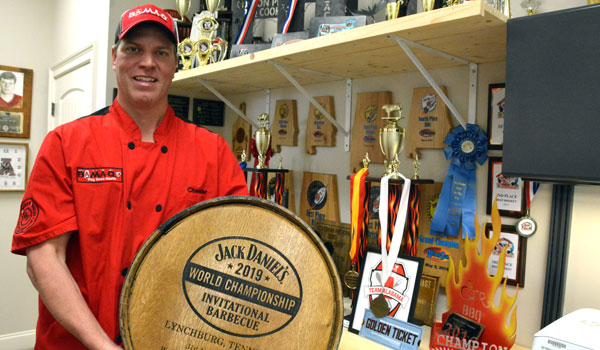 Chester Lewis holds the barrel top he won for placing fifth in the national 2019 Jack Daniel’s World Championship Invitational Barbecue, in the dessert competition. Shown in the background are many other awards his barbecue team, The Specialists, have won over the years. (Reporter photo / Scott Mims)

When former Crimson Tide football player Chester Lewis graduated from the University of Alabama, his drive to compete never left him. These days, it’s barbecue that satisfies that drive, and Lewis has a wall full of trophies to prove it.

Lewis may not have a trophy that tops his 1992 national championship ring, but he’s certainly continued the winning tradition through to present day. Just walk into his State Farm office in Chelsea and you’ll see why.

The latest award garnered by “The Specialists,” Lewis’ competition barbecue team based in Mountain Brook, is Fifth Place in the national 2019 Jack Daniel’s World Championship Invitational Barbecue, in the dessert competition, for creating the “perfect scone.”

“It’s kind of a competitive outlet for me after having played at Alabama,” said the former tight end and long snapper, who played at The Capstone from 1992-96. “That’s kind of what drew me to cooking.”

Lewis’ transition from the gridiron to the grill started in 2010, when former Crimson Tide teammates entered an A-Club fundraiser cookoff at Bryant-Denny Stadium. A friend of a friend, Scott Burton from Madison, Alabama, helped him out and they ended up winning.

“When we won that contest, I just enjoyed the whole atmosphere—cooking and then winning. It kind of lit my fire to do it. It’s like tailgating without a ballgame,” Lewis said.

Up until 2013, he participated in the Backyard Division, which is different from the professional level. The main difference is the pros cook four different meats—chicken, pork ribs, pork butts and brisket. Of the four, brisket is Lewis’ personal favorite to cook; however, he said he believes ribs are the most challenging.

Now a 10-time Grand Champion, Lewis jokes that he started out with a 10-by-10 tent and a Weber grill and ended up with a 45-foot motorhome and a 25-foot trailer dubbed “the BBQ Bus.”

Lewis has even starred in a reality TV series, “Bama-Q Way Down South,” which airs on Destination America and is available on Amazon Prime Video.

He has also manned the grill at Chelsea’s Fire at the Foothills fundraiser at Chelsea City Hall, which raises money for the Chelsea Kiwanis Club.

“I had a really good time there last year,” Lewis recalled.

And last but certainly not least, Lewis is the current president of the Alabama BBQ Association, a nonprofit organization dedicated to growing the spirit of barbecue.

Just a few of Lewis’ accomplishments are:

To learn more about the TV show “Bama-Q Way Down South,” visit Bama-q.tv/ and also look for the show or The Specialists on social media.