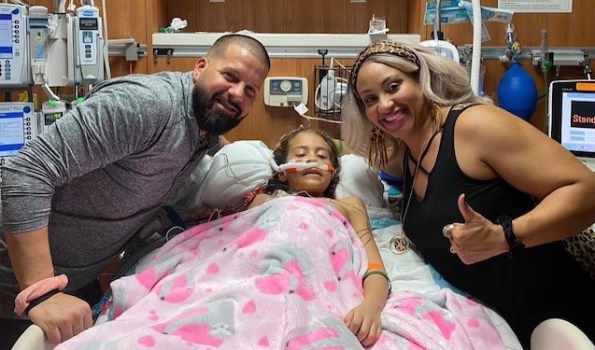 The Riekebergs pictured together at Children’s of Alabama. 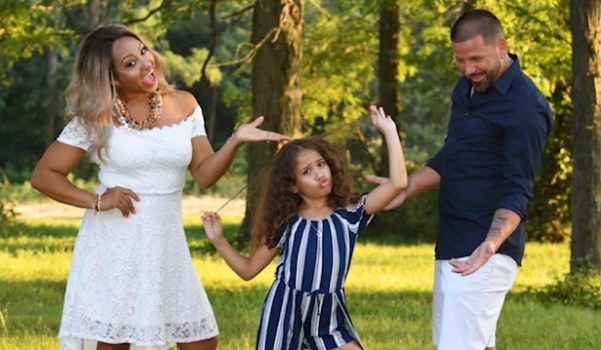 Lacretia and Dustin Riekeberg with daughter, Destiny, before her diagnosis. (Contributed)

“Destiny” is defined as “a predetermined course of events often held to be an irresistible power or agency” (Merriam-Webster.com Dictionary, 2020). That’s one of several definitions. To 9-year-old Destiny Riekeberg of Pelham, who is battling a rare form of liver cancer at Children’s of Alabama, it means much more.

“Destiny is a very unique child. She likes to win everything she does; she’s very competitive. She’s not a fearful child at all,” said her mother, Lacretia Riekeberg.

The Riekebergs moved to Pelham from Nashville about four years ago. Since that time, Destiny had been involved in numerous activities at Pelham Ridge Elementary and in the community—cheerleading, competitive dance, softball, tumbling and more.

But during Christmas break, Destiny became very sick, waking up one day with a sharp pain in her shoulder followed by a pain in her abdomen. Four trips to the pediatrician and a cat scan revealed an enlarged liver but little else. Appendicitis among other things were suspected. After the fourth visit, the pediatrician recommended that Destiny visit the emergency room at Children’s of Alabama.

Lacretia felt that the trip to Children’s would be different, so she went home to pack an overnight bag.

“On the way to the hospital while leaving the house, I looked at Destiny and how frail she was, and I said, ‘She looks like a cancer patient.’ And I said in my mind, ‘I don’t know how those parents do it,’” she said.

Destiny’s father, Dustin, had been headed to Colorado for work but returned home because he was worried. Later that night, doctors told the family they were 99 percent sure Destiny had cancer. It turned out to be a rare liver cancer called hepatoblastoma, which, together with another form called hepatocellular carcinoma, accounts for only about 1 to 2 percent of cancers in children.

“Destiny’s journey since that diagnosis has been anything but typical,” Lacretia said. “We have not left her side. We literally live with her in this room. We’re here with her daily. We’re not leaving until she does.”

The reason Destiny has not gone home is because shortly after she was admitted, her tumor bled, resulting in emergency surgery. Since then, she has remained in the pediatric intensive care unit. Now, not only is she dealing with cancer, but her kidneys are no longer functioning and she cannot breathe on her own.

But even in these circumstances the family has kept an upbeat attitude. Every day, Dustin writes goals for his daughter on an illuminated board in her room.

“I travel for work a lot, so I value every moment I get with her,” Dustin Riekeberg said. “She’s a fighter. She’s fun, energetic and competitive. I know she’s prepared for this fight. I think we’ve prepared her in the mindset of being confident and tackling anything that comes about but being humble.

“I don’t think she fears this cancer one bit.”

Dustin and Lacretia first met on a Carnival Cruise in 1997, and the ship was named “Destiny.” He was from Missouri and she was from Alabama.

When the couple found out they were going to have a girl, they decided Destiny would be the perfect name. It seemed to sum up everything they had been through in their relationship as well as everything that was to come.

“It means strength and she triumphs over obstacles and wins. That’s how Destiny is, really. It’s almost like she has the perfect name,” Lacretia said.

Destiny had always loved acorns for some reason, she added. She would always collect them and bring them home from school in her backpack. This would come to be a source of encouragement to the family.

“I was having a bad day here at the hospital, and it was during doctor rounds and we weren’t really getting good news. I just happened to look down and there was an acorn in her room on the floor by the door,” Lacretia said. “I had prayed to God for a sign the night before, and I believe the acorn was my sign. We have the acorn hanging above her bed now.”

She added that acorns are known to represent strength, potential, immortality, a new start, a new venture and something that’s going to grow to be significant. Carrying an acorn is also meant to provide protection from illnesses.

“There are so many people praying for Destiny, people we don’t know, people all over the world. I don’t even know why or how she has got this attention, but this has happened,” Lacretia said. “We’re just in awe. Strangers come up here all the time to pray for her. It’s just blown our minds. It’s the most amazing thing ever.”

Dustin affectionately calls Destiny “Desto.” Now, he says they are going for “Desto 2.0.”

The family does live updates on Facebook every Saturday at 5 p.m. There is also a GoFundMe page set up at Gofundme.com/f/destinystrong. As of Monday, Feb. 24, $22,755 of the $40,000 goal had been raised. Anyone who wishes to help may contribute, but the family is mostly asking for prayers.

“People everywhere are posting #DestinyStrong and wearing T-shirts, and we are going to have more made,” Lacretia said. “It’s been a really amazing thing, all the support. And it really, really keeps us going.”