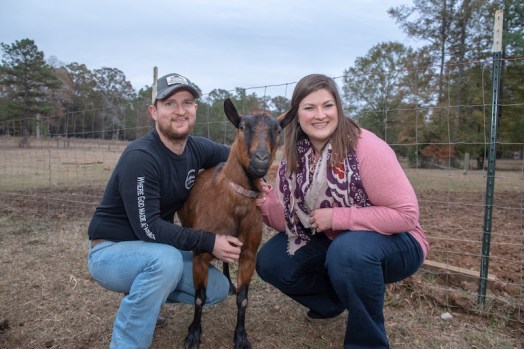 The Fryes are pictured with one of their Oberhasle dairy goats. (Reporter photo / Keith McCoy) 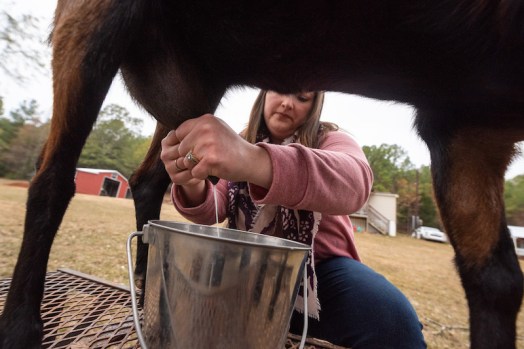 Ahna Frye milks a dairy goat. The milk can be used to make soap or lotion, both of which the Fryes make and sell. (Reporter photos / Keith McCoy)

Nestled below a steep hill just over two miles from Alabaster, a circular sign marks Alleluia Acres Heritage Farm just off Shelby County 26. Though you can’t see it from the road, Ahna Frye is up at work on the property each morning around 6 a.m.—by this time her husband, Cam, is busy welding at Saginaw Pipe. But before Ahna welcomes her first graders at Pelham Ridge Elementary, she is throwing feed out to the cows and goats, and letting the chickens and ducks out so they can free range for the day.

The first house you see as you drive onto the property belongs to Ahna’s parents. In fact, the land was farmed by Ahna’s grandfather and her great-grandfather before that, and the property’s ownership goes even further back in the family. Keep going past some woods and you might see a turkey or two roaming around near the “Breakfast Barn,” what the Fryes affectionately call their chicken house where they harvest eggs. Next to it sits a building they plan on turning into a store to sell their products, and beyond it is the Fryes’ house itself.

The Fryes are unlikely farmers, one might say. When they first married in 2014, they didn’t even own livestock. When they were dating, though, Ahna often fantasized about running a farm on the land where her great-grandfather grew corn and peas amongst the rolling hills and roadbeds that went all the way to Calera. There, atop some of the oldest buildings in old downtown, you will find wood from Ahna’s great-grandfather’s sawmill.

For a while, Ahna’s fantasies were just that. She didn’t think Cam shared her vision. “He was everything but countryfied when we met,” she says. “He didn’t want a truck, didn’t want cowboy boots. He thought everything was silly when we initially met.”

One day, though, Cam was looking out at her parents’ property and thought he’d like to have cows. While he had never owned livestock, his mother’s property in Montevallo was a dairy farm in the 1800s. Dairy goats and chickens were cheaper, so the Fryes decided to start there about a year into marriage.

As the couple prayed about their future and the potential of operating a farm, Ahna happened upon a scripture passage, Deuteronomy 28:11: “The LORD will grant you abundant prosperity—in the fruit of your womb, the young of your livestock and the crops of your ground—in the land he swore to your ancestors to give you.” That verse, which parallels Ahna’s family story, became the basis for the entire operation. Then, the name came to her one Sunday at church. “We were singing a song. I don’t remember what song it was, but the chorus kept saying ‘Alleluia,’” she recalls.

At first, the name was simply Alleluia Acres, but later on it became Alleluia Acres Heritage Farm to fully credit her family’s history on the land. “We added ‘heritage farm’ not just to simplify and help people understand what we are but to help understand who we are,” Cam explains. “We like to be different.”

The first animals to join the farm in 2015 were Gypsy and Daisy, a breed of dairy goats from Switzerland by way of northwest Georgia called Oberhasles. Then came Doc, a large male, and others like Delilah, who sports an all-black coat that comes from a rare recessive gene found only in about 15 percent of goats. Today the Fryes have four generations of Oberhasles.

From the goats’ milk, Ahna makes non-GMO goat’s milk soap and lotion. Gypsy’s face graces the labels of their Glitzy Goat Essential Soap. “We bond to (the goats) more,” Ahna says. “They’re a lot more personal because you have to help them more with labor.”

Next came the chickens, proud residents of the Breakfast Barn. The Fryes care for nearly 40 Buckeyes, a breed started by a woman in Ohio in 1896. Others are Houdans, which originated in France, and Dark Brahmas and Buff Brahmas that yield a little larger egg.

Now that the couple has had time to build up their farm, Cam has the cows he first envisioned when looking out on the fields of the property. Their Galloways, which have only four known breeders in the Southeast, come from Montana and North Carolina. “The Galloway is one of the founding breeds of what people know as the Angus now,” Ahna explains.

The females have a name theme: Zafriah, Zia, Ziggy and most recently Zanna, which means “God’s promise.” The bull, Earp, will grow to 2,200 pounds. “He’s so gentle,” Ahna says. “Whenever Cam feeds him he will let him twirl his hair around.”

Down from the dairy goats, in the fenced-in area most distant from the house, things get a bit dirtier. Their Tamworth hogs originated in Tamworth, England but came from a breeder at the Alabama-Georgia line who is an original member of the Tamworth Swine Association of Indiana. Three-year-old boar, Wilbur, is pushing 900 pounds. The Fryes lost Charlotte, his original mate, in summer 2019 but still have her daughters Fern and Nelly. (Are you catching the Charlotte’s Web theme? It applies to all the hogs except the other sow, Lulu, who was named by Ahna’s late grandmother before she passed away).

No matter the breed, the Fryes are choosy when it comes to the substances they use around the animals. They don’t keep many chemicals in the house because of the field lines running underground—they even use organic car wash because of the runoff that could potentially affect the animals. And they don’t use antibiotics or growth hormones. “You can go to the grocery store and buy something that’s labeled organic, but you still don’t really know where it came from,” Cam says.

But when it comes to their animals, they do—including the Saxony ducks and Cayuga ducks that lay a purplish black egg and a breed of American chinchilla rabbit (the name refers to the grayish, blackish, brownish coloring) used to help develop all the other domestic breeds of rabbits that exist today. “We only have a male right now but we’re searching for a female so we can repopulate that breed, which is our purpose with all our breeds but especially with him,” Ahna says.

If you’ve been tallying up the animals on this farm tour of an article, you’ve no doubt noted that farming is no easy moonlighting job. From around 3:30-5 p.m. the Fryes are tending to the animals after work. “It’s hard,” Ahna admits. “My job is already mentally exhausting.”

Ahna says the balance is more difficult for her because she can’t leave her work at work. Once arriving home, she has to manage the books and social media sites. Somewhere in there, though, she writes on a weekly mini blog, “Blessings from the Barn,” which includes facts about the farm as well as faith-related subjects.

Farm life isn’t slowing down anytime soon for the Fryes. They are planning to open their onsite store to sell pasture-raised meat and eggs, goat milk soap, goat milk lotion and apparel in early 2020 and want to host tours as well. “It’s evolved from doing it for ourselves to now neighbors helping neighbors. We’ve developed a really good relationship with all of our customers,” Cam says.

Alleluia Acres can be reached at 205-835-9500 or at Alleluiaacresheritagefarm.com.