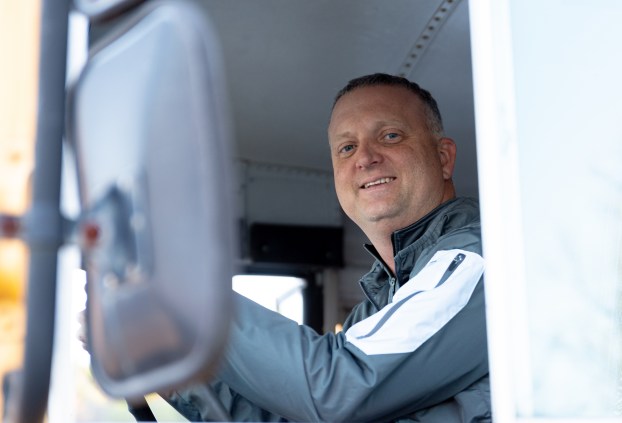 Sounds from the Burns and Allen Comedy Show of the 1940s can be heard coming from the speakers of a 2010 Toyota Corolla as it makes its way onto the I-20 west ramp near Lincoln, Alabama before dawn. At 5 a.m. Mark Sanders is already a solid 30 minutes into his commute from Jacksonville.

The first hour and 45 minutes of his day are spent driving 93 miles to Helena Middle School—a drive he’s been making each weekday for the last three years. Technically, though, he first opens his eyes at 3:45 a.m. before bridging from I-20 to I-459, and then to I-65 and finally Valleydale Road before reaching his final destination.

“In my mind, I had decided to do the commute for one year, and I was nervous about commuting that far at first,” Sanders says. “I wanted to try it for one year and I did good with it, and now I’m three years from being able to retire so I’m not going to change it now.” 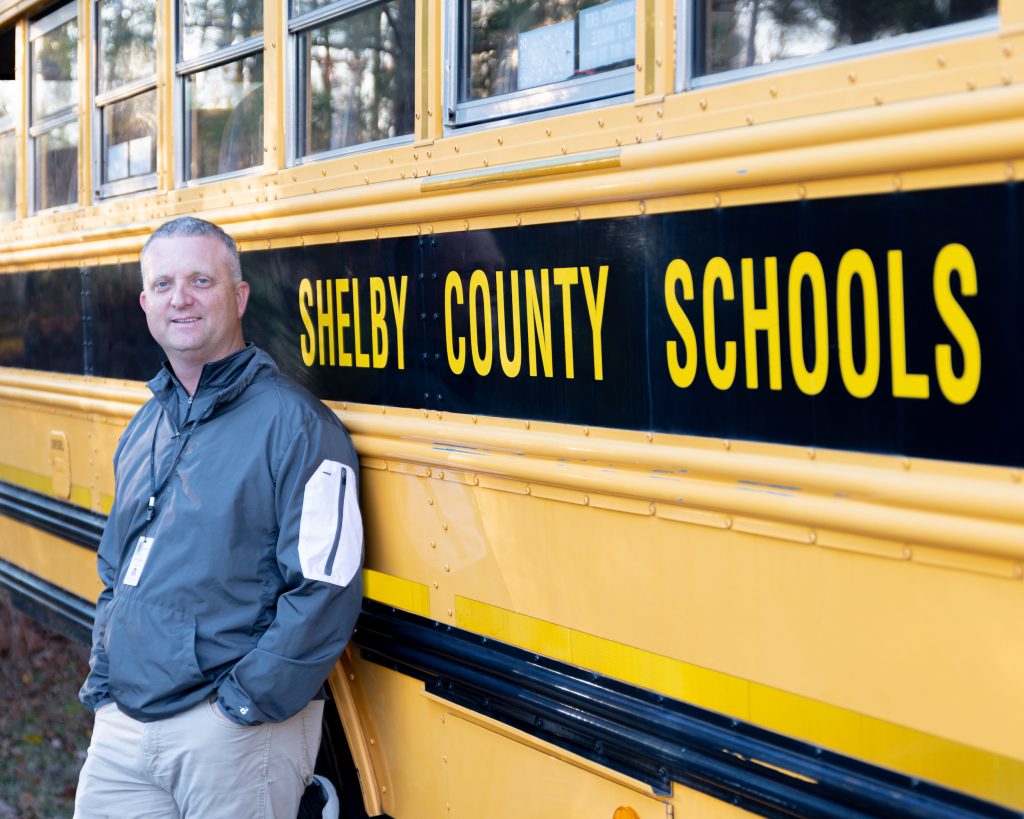 Sanders admits he could’ve gotten a job closer to Jacksonville when his and his wife’s house sold in Pelham a few years ago, but now he considers his commute back near his hometown of Alexandria and alma mater Jacksonville State as just part of his normal work day. “Everyone typically has a beginning, middle and end to their work day, and it’s just kind of how I look at it. It’s the start of my day,” he says.

Since 2008, the middle of his day has been filling the minds of seventh grade students with the knowledge of civics and geography, which happens to be the same year that the school opened. He’s also the head softball coach of the program he started after coming over from Riverchase Middle School.

When he’s not teaching or coaching, Sanders can also be seen greeting his riders that step onto bus No. 05-06 whose route he runs each morning and afternoon, before and after his drive from Jacksonville.

With all these different roles, he uses the alone time on his commute to help prepare him for his job and how he can improve the lives of his students and softball players.

“I do a lot of thinking about the day and what I need to do,” Sanders says. “I think a lot about my coaching duties, areas our team needs to get better in, but I also have devotions with my players.” In addition to the Burns and Allen Comedy Show, you might hear an audiobook by John Maxwell, The 17 Indisputable Laws of Teamwork, on his speakers. “There’s a lot of leadership training stuff he talks about, and I put that into a presentation format,” he says. “We have breakfast brought in by parents and do that once a week.”

.Has Sanders always been an early riser, you might wonder? The answer is no, and it’s something he had to get used to when moving from Pelham back to Jacksonville. “For a long time, I was more of a late-night person, and I’ve had to adjust to being an early morning person,” Sanders says. “When we lived in Pelham, I probably didn’t go to sleep until about midnight.”

By the time Sanders rolls up to Helena Middle School around 6 a.m., he’s already been awake several hours and he prepares to change keys from his Toyota Corolla to a big yellow school bus. By 6:40 a.m. he’s departing from the HMS parking lot. His relatively quick route takes him to a neighborhood that connects to the school property.

“I love to be the first one to greet them,” Sanders says. “I ask every kid how they’re doing and how their day is going. I just like to be the first person to talk to them. At that point, I’m wide awake and I’ve had my coffee. I’ll ask kids how they did as far as football goes if there was a game the night before, and I like to interact with them.” 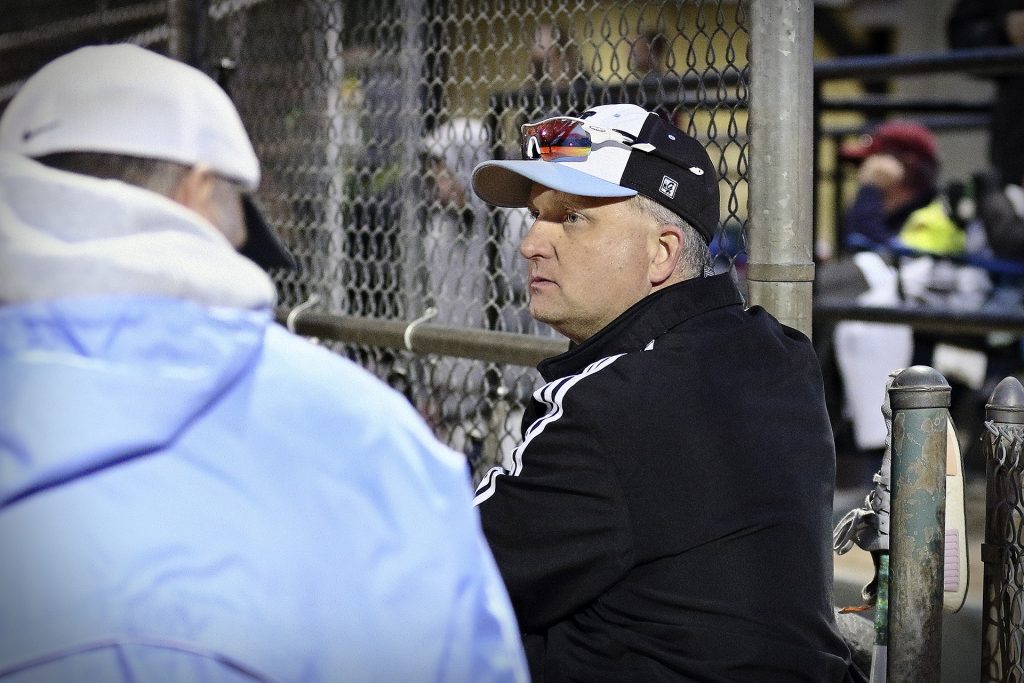 Between both morning and afternoon, Sanders usually has about 72 riders on his bus, and come spring time, his schedule will change even more with the arrival of softball season and its afternoon games and practices.

Some days bring a doubleheader, or there could be a game beginning early on a Saturday morning for a tournament; this is where Sander’s good friend and co-worker Bruce Howland comes into play.

“Me and my wife just kind of have an open-door policy for him because we’ve become such close friends,” Howland says. ”He’ll bring a change of clothes, and if we have a tournament on the weekend, he’ll stay just to eliminate any commute issues.”

Howland has known Sanders for the last nine years and actually served as a student teacher under him when he changed his career path to teaching. “Mark was instrumental in helping me get started in teaching and a big reason why I’m at Helena,” Howland says. Now, Howland also serves as a seventh-grade social studies teacher and an assistant softball coach alongside Sanders. In a way, hosting Sanders overnight is just helping him, much like Sanders helped Howland nine years prior.

“My initial reaction when he told me about his commute was, ‘You’re nuts,’ but when you hear him talk about the opportunity he has and the joy he has for being in Helena it makes sense,” Howland says.

The 186-mile roundtrip commute might seem like a chore or hassle, but Sanders wouldn’t have it any other way. “He loves this school and he just enjoys teaching here,” Howland says. “He loves the kids (and) the environment, and he wants to stay here until he decides to retire.”