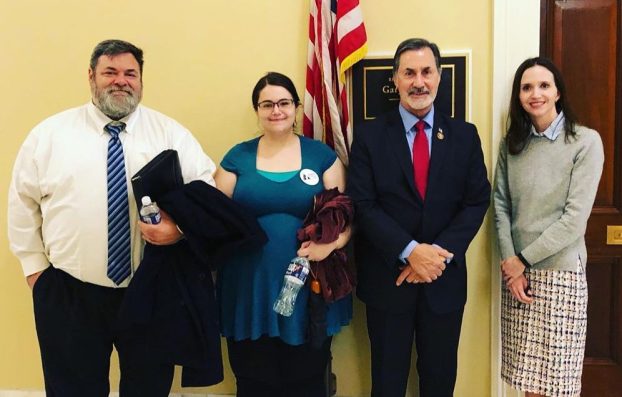 Pictured are Mike and Isabella Scott of Helena, U.S. Rep. Gary Palmer and Ashley Davis Greene of Birmingham. The area residents are fighting for a bill that would fund more research for severe headache sufferers. (Contributed)

HELENA — Most everyone has had a headache in their lifetime, but some people have headaches so severe and sometimes so often that it affects every facet of their lives. Mike Scott of Helena is one of these people.

Scott suffers from a type of headache known as a cluster headache, and his daughter, Isabella, suffers from migraines, as did Scott’s late wife. Scott has had the headaches since his early teenage years. He describes the symptoms as a type of intense pain behind one eye that can range from uncomfortable to unbearable.

“I know some people who have them chronically, and I don’t know how they survive, honestly,” Scott said.

Cluster headaches are called so because they tend to occur in “clusters” of which the frequency can vary for sufferers. When Scott first started having them, he thought they were sinus headaches, but after thoroughly researching the symptoms, he finally got his answer, which his neurologist confirmed by diagnosis about 15 years ago.

Sufferers of cluster headaches have been known to have symptoms two to six times a day for as long as months at a time. Also known as “suicide headaches,” they can also cause heart palpitations and anxiety.

“It’s really a mystery as to when they come and go,” Scott said. “You just live in fear of when you’re going to have them again.”

In an effort to help others like himself, Scott, along with his 19-year-old daughter, Isabella, and Ashley Davis Green of Birmingham, recently participated in an event called “Headache on the Hill” in Washington, D.C.

Headache on the Hill is an annual advocacy event organized by the Alliance for Headache Disorders Advocacy (AHDA), which unites health professionals, migraine and cluster headache advocates and patients to meet with legislators and make requests focused on improving awareness about the impact of headache disorders and the need for research funding.

Scott, his daughter and Green met with Congressman Gary Palmer of District 6, as well as staffers from the offices of Sen. Richard Shelby and Sen. Doug Jones, asking them to co-sponsor the Opioid Workforce Act of 2019 (H.R.3414 / S.2892) and requesting an amendment to the bill that would change some problematic language.

“The bill as currently written would provide funding for approved residency training programs in addiction medicine, addiction psychiatry, and pain medicine,” Scott said. “However, there currently are no residency programs in these specialties. We asked for them to revise the language to route the funds towards UCNS accredited Headache Medicine fellowships instead.”

Scott added that there is a misunderstanding about the severity of cluster headaches and migraines.

“I’d like people to be more aware of these things and how severe they can be,” he said.

Green, 39, has suffered from chronic migraines since she was 6. She said 15 percent of Americans, or about one out of seven people, have migraine disease. Migraines are chronic when they occur for 15 or more days of the month every month. Green has had a migraine every day for more than two years.

“I have one every day. That’s pretty debilitating. That’s why I’m a big advocate for why aren’t there better treatment options available to us?” she said.