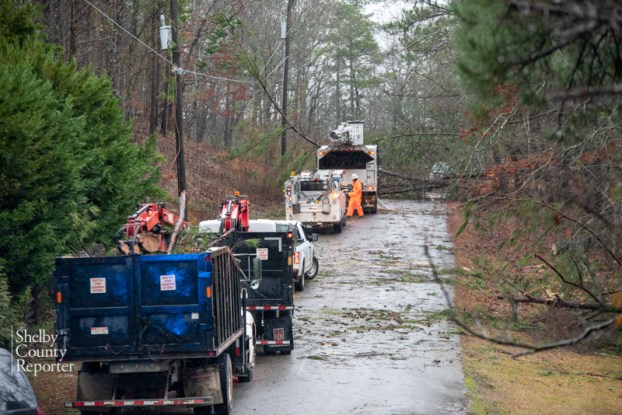 Workers are seen in the midst of cleanup efforts following a recent storm in Shelby County. (File)

Shelby County is under a “moderate risk” for severe weather forecasted for Easter Sunday, the National Weather Service Birmingham announced. 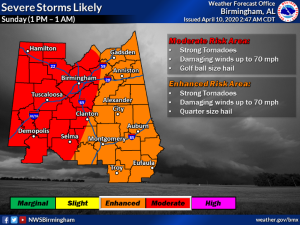 The threat level is defined by the possibility of strong tornadoes, damaging straight line winds up to 70 miles per hour and golf ball size hail. The moderate risk is the second most severe, under high risk.

“We’re looking at all types of severe weather with this system and also some heavy rain,” said NWS Meteorologist Mark Rose.

Rose said severe weather is most likely to hit between 6 p.m. and midnight on Sunday, while rain is expected to move in much earlier, possibly as early as 3 a.m., picking up in intensity during the day and continuing into Sunday night.

The forecast anticipates 2 to 2.5 inches of rain for Sunday, and along with that the possibility of flash flooding.

“Of all the threats, (flash flooding) is probably our least,” Rose pointed out, “but there’s certainly the potential that we could see localized flooding.”

As the state remains under Gov. Kay Ivey’s stay-at-home order, Rose said hopefully most people will be at home during the severe weather threat. He advises those living in mobile homes to have a plan in action and to move to a safer location before any warnings are issued, if possible.

“People should have a means of getting warnings,” Rose said, noting that battery operated radios, NOAA weather radios, spare batteries and phones with the ability to receive weather warnings are all good to have on hand.

For more information or to report severe weather, contact the National Weather Service Birmingham at 205-664-3010 or visit Weather.gov/bmx/.

Say ‘thank you’ to medical professionals by buying them coffee

CALERA – For those in search of a way to say thank you to health care professionals, consider participating in... read more