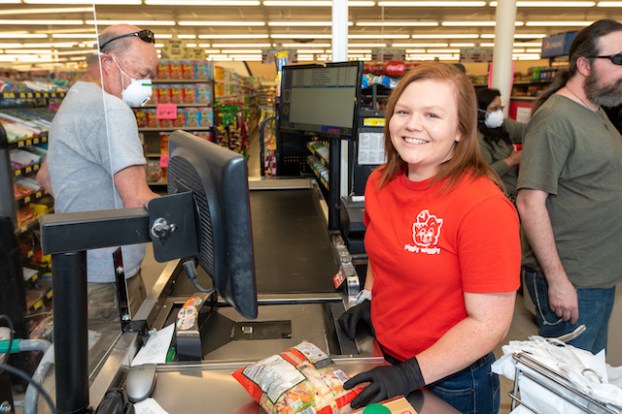 Grocery store employees, especially cashiers, are taking extra precautions when it comes to interacting with customers during the COVID-19 pandemic.

Handling cash and keeping her work station regularly sanitized are among the top concerns of Maggie White, a cashier at Piggly Wiggly in Columbiana.

White, a nursing major at LaGrange College in Georgia, has worked at the store for just over a year. Upon her most recent return from college, the pandemic was becoming serious and White admittedly became nervous about infected people shopping at the store—nervous for her own safety as well as that of others.

“This is a small town. People don’t worry as much about getting sick,” White said. “We have a lot of older people coming in, and I worry for their sake.”

White always wears gloves, wipes down her work station at least once every hour and washes her clothes after every shift. The store has placed plexiglass shields between cashiers and customers as well.

White also takes care when handling cash due to its reputation for being one of the dirtiest items people touch on an everyday basis. She estimates about 50 percent of customers pay with cash versus credit or debit cards.

“I’m definitely more aware of where people put their money,” she said. “If it is not in a wallet, I get more nervous, or if they cough or sneeze.”

Many customers are taking precautions as well; for example, one customer cleaned her money before spending it. Many others are wearing masks, gloves, bandannas and sunglasses.

White said the store’s busiest times are during the lunch hour, and on Sundays and Fridays. Piggly Wiggly is reserving its first hour every day, from 7 a.m. to 8 a.m., for senior citizen shoppers.

When asked about other ways people can help, White suggested that simply being nice goes a long way.

“A little smile or a nod would be great,” she said.

For the most part, people seem to be cooperating.

“I appreciate the community being so nice to employees here; 99.99 percent of this town has just been wonderful,” said store manager Gary Bradford.