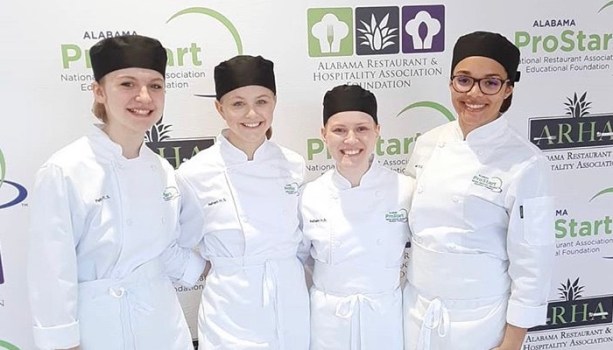 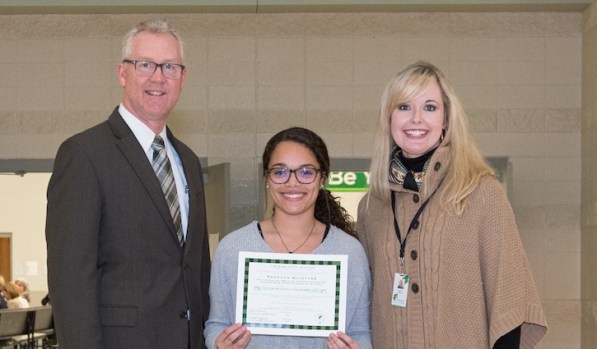 McIntyre was recognized at a recent Pelham City Schools Board meeting for her accomplishment. She is pictured with Superintendent Dr. Scott Coefield and Pelham High School Principal Dr. Amanda Wilbanks. (Contributed)

PELHAM — It was part passion and part necessity that led Raehgan McIntyre to know her way around the kitchen so well.

McIntyre’s younger sister, Madison, was diagnosed with cancer at a very young age and, as a result, Raehgan would often take over as the family cook.

“I had to step up and cook for the family and I’ve loved it since then,” she said, adding that Madison, now 12, is currently four years cancer free.

McIntyre, a culinary student at Pelham High School, was recognized at a February board meeting for being named the 2019 High School Culinary Student of the Year by the American Culinary Foundation Alabama.

The junior competes on the school’s culinary team with Chef Doug Allen.

“He’s taught me so much,” McIntyre said of Allen. “He inspires me to get better every day with my cooking.”

McIntyre said lamb is one of her favorite dishes to prepare, along with shrimp, which she also helped prepare for the Fifth Annual Graze Birmingham event in September 2019. There, the students who attended cooked sautéed shrimp with a smoked garlic cream sauce.

And she has no plans to stop anytime soon.

“Cooking is a distraction from certain things. I love it,” McIntyre said. “It is preparing me for the real world when I have to cook for myself.”

McIntyre expressed thanks to Allen, who nominated her for the award.

“Raehgan has been one of those students that signed up for any and all opportunities to be involved in cooking,” Allen said. “From ribeye steak competitions, sport team banquets, school functions and our state culinary team for ProStart, she has been one of the first ones to put her hand up.”

Added Allen, “Even during this social distancing time, (Raehgan) has cooked at home for her family and sent me pictures of her dishes which look great.”