Dr. Dotti Bailey, the executive director of SafeHouse of Shelby County, has earned a Doctor of Social Work from the University of Tennessee, which is expected to benefit those served by the organization.

Bailey continued to direct the nonprofit group that assists victims of domestic violence and sexual assault in the Shelby County area while pursuing the degree and also while home-schooling her two grandchildren, who are 5 and 6—all in the midst of the COVID-19 pandemic.

“Really it was working at SafeHouse that led me to pursue getting a doctorate,” said Bailey, who first joined SafeHouse in May 2013. “I believe the research that I did is going to benefit the people we serve a lot.” 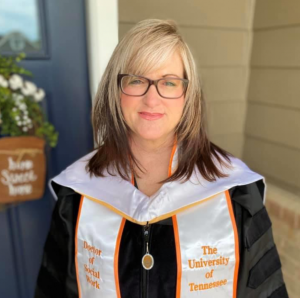 Dr. Dotti Bailey earned a Doctorate of Social Work degree from the University of Tennessee. She leads the nonprofit SafeHouse, which assists victims of domestic violence and sexual assault in Shelby County and surrounding areas. (Contributed)

Participants in her study included adult victims along with one of their children between the ages of 8 and 18, who each submitted a 50-part questionnaire assessing the child’s behaviors and responses to IPV. Several key factors were considered, including violence, involvement, risk, community, other victimization, symptoms and actions.

“This study shows that children have a very individualized experience of IPV and they actually perceive the violence to be more severe and frequent with greater involvement and risk than the parent perceived,” stated a summary of Bailey’s research. “Children exposed to domestic violence are an underserved population, yet they are key to preventing and ending the cycle of violence.”

Bailey’s colleagues expressed their appreciation for her dedication to the field:

“Dotti’s dedication to not only the mission of SafeHouse but to our staff as well as been evident,” said Elishua Markham, community services director. “Throughout it all, Dotti was always available to anyone who needed her. I can’t wait to see what else she accomplishes!”

Brandi Duke, residential director, added, “I’m so proud of her for working so hard to get her PhD. It’s really amazing that she has been able to achieve that goal and still give 100 percent to overseeing SafeHouse. I think that really speaks to her dedication and service to others.”

April Brasher, SANE clinical coordinator, said Brasher hired her in 2016 to open the sexual assault program of SafeHouse. She said the two immediately clicked and she knew that she was in the right place.

“She sees the true potential in all of us, including victim survivors, and inspires us to see our true potential. All of the countless hours, blood, sweat and tears that she has poured out is not for her but for everyone else around her,” Brasher said.

SafeHouse serves Shelby, Coosa, Clay and Chilton counties and oversees a 56-bed emergency shelter that operates 24 hours a day, seven days a week. Its main office is in Pelham.

Bailey joined the nonprofit in 2013 and specializes in child trauma, complex trauma, trauma-focused interventions and trauma-informed care. She is also a trained child forensic interviewer, certified in Trauma-Focused Cognitive Behavioral Therapy (TF-CBT) and is a member of National Center for Crisis Management and the Academy of Experts in Traumatic Stress.
She received her Bachelor of Science in social work from the University of Montevallo and her Master of Social Work from the University of Alabama.

“For all of my life I always felt like I was going to be in the helping profession,” Bailey said. “I’ve never been more proud to be somewhere than where I am now.”