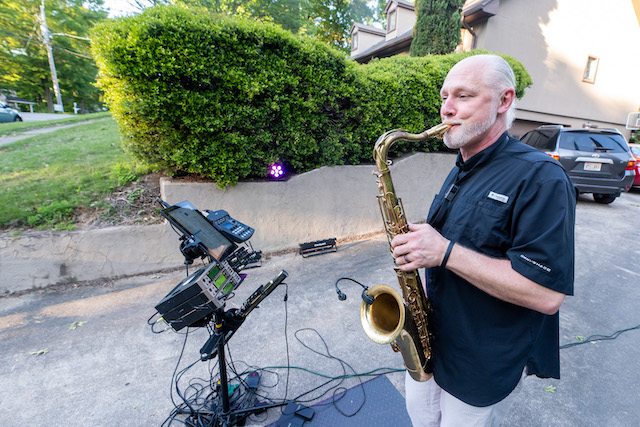 Alabaster’s own Jerry Robbins has been nominated for an Alabama Music Award in the category of Bama Jazz Male Artist.

Though the nomination had already taken place, Robbins gained some new fans—among them friends and neighbors—when he started performing driveway “concerts” in front of his Alabaster home recently.

Robbins is one of 18 artists nominated in the category.

“There are some really great musicians on that list,” he said. “I’m honored to just be on the list with these names. These are guys I’ve respected for years.”

Robbins was made aware of the nomination via email, but at first he didn’t think it was for real—he even initially deleted the email thinking it was spam.

Upon finding out, however, he shared the news with his Facebook friends and shared a link to the webpage where members of the public can vote for one artist in each category.

“I thought, ‘Is this real?’ I wasn’t expecting it, and I hadn’t been involved with Alabama Music Awards at all.”

Robbins, who works in software, has some interesting stories to tell from his years of playing the sax. He has shared the stage with the Temptations and Dave Brubeck; on both occasions he was selected from a list of union players. He was also a regular at Ringling Bros. and Barnum & Bailey Circus whenever it came to town, performing in a live band used for the three-hour show.

“It’s fun to play with the elephants,” Robbins said, recalling, “One time an elephant spit on my music stand.”

Robbins was also a church musician for 20 years at multiple churches. He still performs regular gigs and even got some additional bookings from his driveway performances.

“I look for every chance to spread smooth jazz,” he said.

The Sixth Annual Alabama Music Awards will be held Sunday, July 26, 2020 at the Bessemer Civic Center, 1130 9th Ave. SW., Bessemer. To cast a vote for Robbins or any other performer, visit Alabamamusicawardsshow.com and click “Vote Here.”