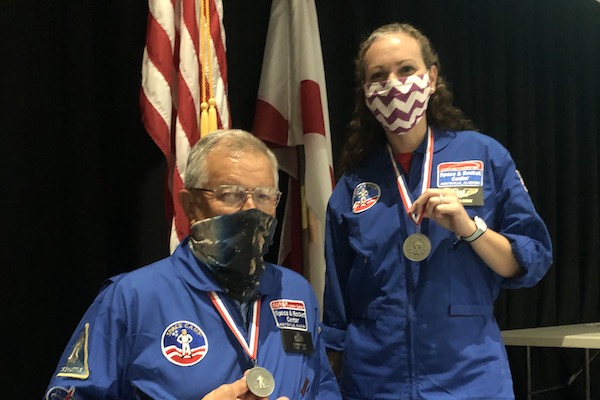 Steve Ruiz (past recipient) and Andrea Godsey (this year’s recipient) wear their medals representing “The Right Stuff” Award, which is awarded to just one trainee at each Space Academy for Educators. Contributed

Andrea Godsey had dreamed of attending Space Camp ever since she moved to Alabama in 2001. Fast forward to this summer, Godsey, a third grade teacher at Creek View Elementary in Alabaster, not only got to live that dream but also received a prestigious award for her leadership. 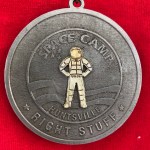 A close-up of Godsey’s medal.

Godsey attended SAE (Space Academy for Educators) at the U.S. Space and Rocket Center in Huntsville and was named the recipient of “The Right Stuff” Award, which is given to just one trainee at the close of each program.

Godsey’s journey started in summer 2019 while attending a technology conference in Mobile, where a representative of the Space and Rocket Center was promoting the SEA program.

“I became obsessed with the idea of going and could not wait for applications to open,” Godsey said. “The application for Space Camp opened October 2019, and I applied the same day they went live.”

In order to complete the application process, Godsey had to write an essay and submit an example of a science lesson she had used with her students in the classroom.

She admitted that she waited impatiently to receive confirmation of her acceptance to SAE.

“I was over the moon when I got my email confirming attendance for Summer 2020,” Godsey said.

Days at camp were 12 hours long and consisted of teamwork exercises that prepared the participants for mission training. Godsey’s team, Team Harmony, conducted a Mars mission for which she was selected as Commander.

Their second mission was a shuttle mission where Godsey was selected as Flight Engineer 1. This involved working in a microgravity simulation using the MMU (Manned Maneuvering Unit) to build a structure outside of the ISS (International Space Station).

“We also got to train using the MMA (Multi Access Training) and the 1:6 chair that makes you feel like you are bouncing on the moon,” she said. “The chair mimics the one sixth of the gravity on the moon. We also practiced escaping a crashed helicopter by getting strapped into a harness and going down a zip line backwards into the water.”

What came as perhaps the biggest surprise to Godsey was hearing her name announced as the 2020 SAE Right Stuff Award winner. One of the highest honors at Space Camp, The Right Stuff Award—named from the Tom Wolfe novel of the same name—is given to the trainee who exemplifies the courage, integrity and excellence of the early space explorers and test pilots.

“I was looking around waiting to see who was going to be called when I heard my name and I couldn’t believe it,” Godsey said. “My teammates were incredibly sweet and supportive. I heard them cheering in the background as I walked up to the stage to receive the award from Steve Ruiz, a former RSA winner and teammate.”

The award recipient is chosen from among a group of nominees—one per team—submitted by each team’s leadership for consideration. Then, the submissions are carefully considered and a winner is selected.

Ruiz, a teammate of Godsey’s and a former Right Stuff Award winner, was quick to congratulate her when presenting the award.
“Be proud that you were the number one graduate,” he said. “You deserve it; you earned it! You had a better attitude than everyone else and you exemplified the right stuff qualities that got our astronauts in space.”

Another teammate, David Hitt, an author of two books on spaceflight history and a regular speaker for the Educator Space Academy, also weighed in.

“Andi brought such a warmth and friendliness that helped mesh Team Harmony first as colleagues and then as friends,” he said. “She was a great choice for the Right Stuff Award, and it’s encouraging to know there are incredible ambassadors like her going into our state’s classrooms to inspire the next generation of explorers.” 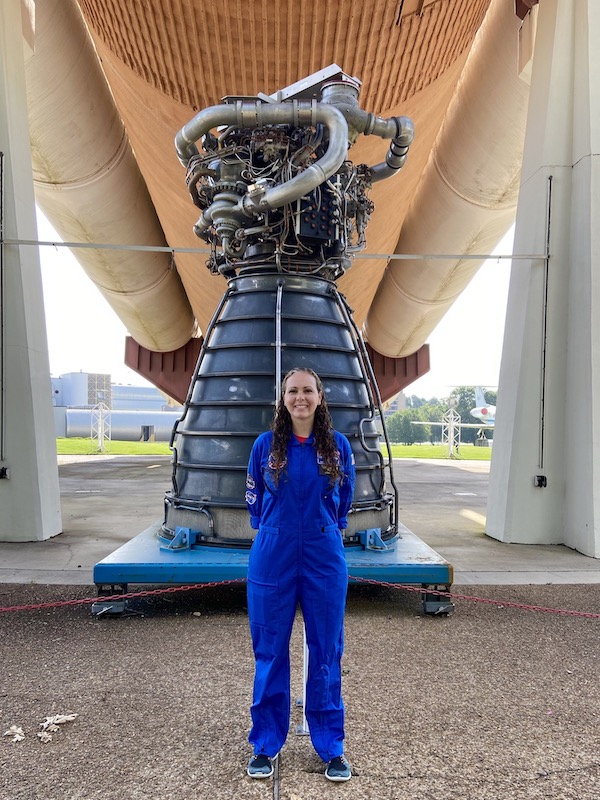 Godsey is pictured unmasked while at the U.S. Space and Rocket Center in Huntsville.

Apryle Mather, another teammate, agreed.
“You were constantly thinking of how to apply all we were learning and doing to benefit your students and other teachers. You were encouraging to the rest of the team. You made an effort to get to know all of us,” she said.

Godsey said she is still “over the moon” over the award and hopes to continue to demonstrate the same qualities in her everyday life and in the classroom.

“I cannot wait to tell my future students all about Space Camp, instill a love for science, and encourage them all to participate and learn about what space is all about,” she said. “After all, they are the future of space exploration.”