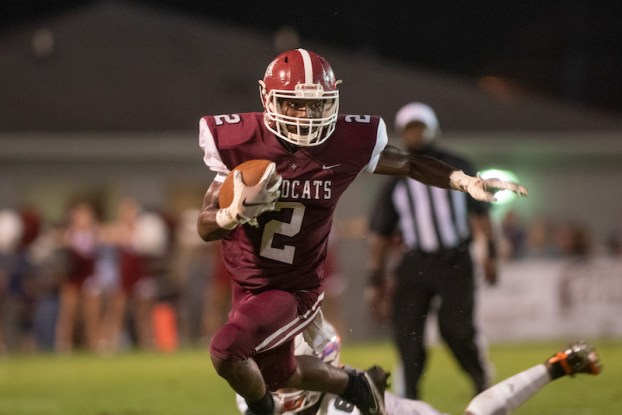 BUHL, Ala. — The Shelby County Wildcats (2-0, 1-0) picked up their second straight win and first region victory Friday night, Sept. 4 at Sipsey Valley, shutting out the Bears in an impressive defensive showing, 35-0. It would be Shelby County’s first shutout since 2009, incidentally the last year they made the playoffs.

Following last week’s 20-18 win over Montevallo, the Wildcat defense went out firing on all cylinders, keeping the Bears in check while Tyrese Goodman hauled in two touchdown passes from Kaden Cardwell, making the score 14-0 by halftime.

The halftime break did not slow the Wildcats’ momentum as early on, Issac Montgomery’s pick six set the tone for the rest of the night. Afterwards Shelby County just kept grinding it out, scoring on 98- and 94-yard back-to-back drives.

The final two scores were rushing touchdowns, with Raheem Montgomery and Goodman credited for the successful carries.

“We’re playing so much better on defense than we have in the past few years,” said Shelby County coach Heath Childers. “It’s really given us a chance to be successful. In the past we’ve been pretty porous on defense, and it didn’t really shut us up to have success but this year it’s working out for us.”

Childers said the maturing Wildcat defensive players are getting used to the speed of the game, and the results are speaking for themselves.

“We’ve got most of those guys back, and they picked up right where they left off,” he said. “They’re flying around, they’re tackling, we’re able to get lined up right, and they’re able to make adjustments on the fly. It’s great to see kids grow up and see that light bulb go off.”

Childers praised inside linebackers Evan Joiner and Raheem Montgomery, as well as Jacob Fox for keeping the Bears in check, lining up consistently and making tackles. He also recognized Issac Montgomery for his pick six.

“JT Pennington had an outstanding game. There were times he was un-blockable,” he added.

Seth Hall also made a big interception, and overall the Wildcats totaled 479 yards rushing for the night.

Next week Shelby County hosts Selma in a big home region game.
“They’re a really good football team, and we’re going to have to be better than we were tonight to be successful against those guys,” Childers said.

By ANDREW SIMONSON | Special to the Reporter GADSDEN – A year ago, Oak Mountain took seven weeks to get to... read more