Before Richard and Linda Cook first moved to Shelby County in 1987, he told her about a framing business in Aliceville that the couple ended up purchasing. Richard, a woodworker, would make the frames and Linda would finish them off with glass. It was a business they brought to Columbiana and became known as Busy Hands Framing and Gifts, now located in the Shops of Columbiana.

“He’s the reason I’m in that business,” said Linda, Richard’s wife of 53 years. “It kept us even after retirement, it made us closer. We called it a mom and pop business as we aged. We said we’re becoming the people we used to talk about; the little old couple.” 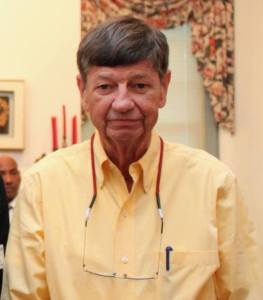 Sadly, Richard’s health deteriorated to the point that he could not work with wood the way he used to. While he remained a beloved figure in the community and could carry on conversation as well as anybody, things were not the same.

“It was hard to watch him not be able to do that anymore because he loved that,” Linda said.

Richard passed away on Oct. 4, leaving behind a legacy of leadership and friendship known to many throughout Shelby County. He was a retired office manager with Alabama Power, where he worked for 37 years in Montevallo and Columbiana. Cook also served as president of the former South Shelby Chamber of Commerce, president of Columbiana Merchants and Professionals—which he and Linda formed together—and helped to form a local Rotary Club.

“I never heard any of the ladies that worked for him complain,” said Linda, adding that Richard was the kind of manager who could take a practical joke. The employees at Alabama Power even had a voodoo-type doll that looked like him, she said.

“He said, ‘Stick me all you want to, you’re still going to do your job,’” she said. “Everybody seemed to always get along.”

Linda said the Reform, Alabama native wanted what was best for his community. He wanted Columbiana to grow and was very concerned about the downtown retail district. He was also an enthusiastic supporter of the Columbiana Main Street program, even though at the time of its inception his health had started to decline.

Richard was proud of his alma mater, Mississippi State University, where he graduated in 1969. Linda said he had been asked if anything in his wardrobe was not maroon. Understandably, he could often be seen wearing a Dallas Cowboys hat because of his love of quarterback Dak Prescott.

About eight years ago, the family feared that Richard might not make it back to Starkville due to his health, but he rebounded and was able to go back on numerous occasions.

“The last time was two years ago this fall, and we made several family pictures,” Linda said.

In his later years, Richard would sit in a certain swing outside the Columbiana Corner Shoppes. It became such a routine that, when the swing was sold, he picked the nearest chair and started sitting there.

Bonnie Atchison of Columbiana described Richard as “exceptionally hard-working.” She said he was supportive when the South Shelby Chamber was formed.

Atchison recalls a lighthearted memory about Richard, when he and Johnny Lowe first walked into Jeanette Nivens’ house, which was to become an office for the then South Shelby Chamber and local civic organizations. Nivens had had pink carpet in the house.

“Richard opened the door and he looked in there and he said, ‘Oh, this pink has got to go.’ I never will forget that as long as I live,” Atchison laughed.

She said he had a memorable laugh that was a “deep chuckle, way down in his chest.”

“He was a wonderful man. His wife Linda was always very good, and they’re just special people to this community,” Atchison continued. “Our community, when he began to go down, we just lost really a big part. He was very bright and knowledgeable, and he was just a good friend, fun to be with.”

Third Run for Our Lives 5k set for Oct.…