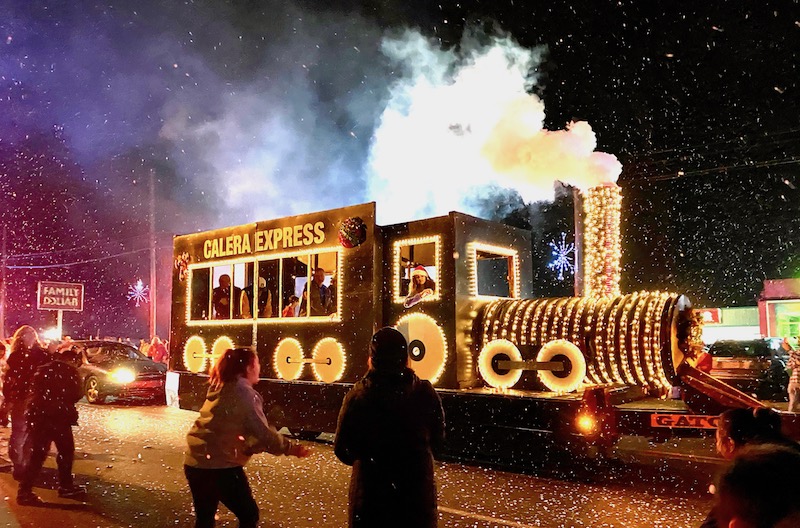 The Calera Christmas Village and Craft Fair and following Christmas Parade will move downtown this year and will be held Dec. 5. (File)

CALERA — The city of Calera’s Christmas festivities will move to downtown Main Street this year in line with recent revitalization efforts. It all starts with the Christmas Village and Craft Fair on Saturday, Dec. 5 from 2-6 p.m., followed by the Calera Christmas Parade at 6 p.m. and live music with country act Deputy 5 starting at 7 p.m.

Santa will arrive for the daytime portion from 2-4 p.m. to offer free photos with kids, all from a socially distanced perspective—kids will sit in a seat adjacent to Santa’s throne instead of in Santa’s lap—and kids will write letters and make crafts.

Fittingly, the theme of this year’s multi-faceted event is “Santa’s Village.”

“Obviously, it’s the first year that we’re having it at Main Street downtown,” said Calera Parks and Recreation Director Seth Gandy. “It’s something kids and adults enjoy very much. We’re looking forward to a really good event, and we’re excited to have it all in one location downtown.”

At the Christmas Village and Craft Fair, up to 50 booths will offer unique products to people of the local community and surrounding areas. The event will take place in the Calera Courtyard, off 17th Avenue in the lot behind the businesses along U.S. 31 and Alabama 25. Downtown merchants will be open and offer specials as well. Also, Adventurer’s Coffee Co. will provide hot chocolate.

The parade will follow at 6 p.m., starting at the Calera Community Center and moving along U.S. 31, ending at the National Guard Armory. Every float must be decorated, and awards will be given for Best Holiday Spirit, Most Creative and Most Entertaining.

Added Batson, “I can’t wait to see the turnout for our first concert in the Calera Courtyard, because it will be the first of many.”

Country cover band Deputy 5 will headline entertainment starting at 7 p.m. on the stage behind the future location of Big Lupo Pizza Café, at 8259 U.S. 31. The live music will continue until 9 p.m.

The city will close 17th Avenue so the courtyard will be an extremely walkable, pedestrian-friendly area throughout the evening, Batson noted.

“I’d like to encourage everyone to come out and enjoy the Christmas Parade and practice social distancing, being safe at the same time,” said Calera Mayor John Graham.

Anyone interested in reserving a vendor space or entering the parade may contact Tammy Smith at tsmith@calera.org or 205-668-3804.