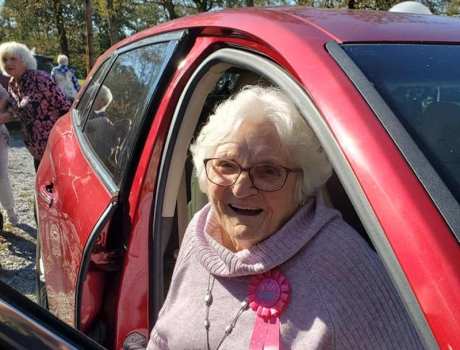 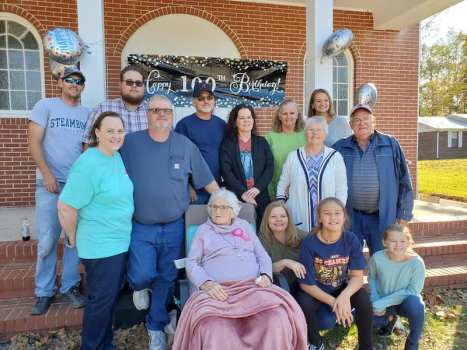 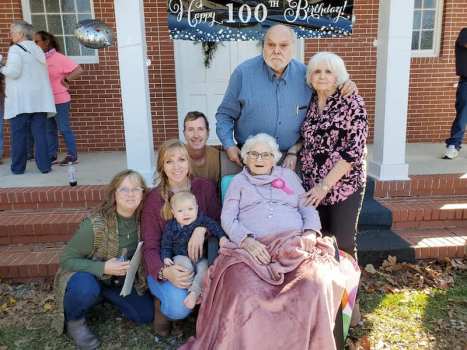 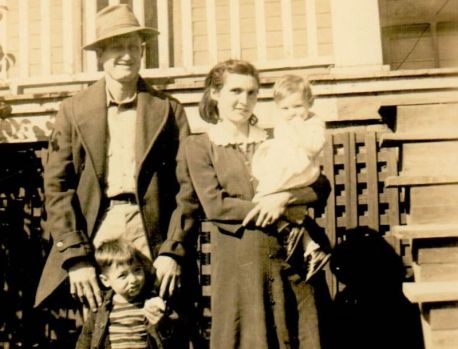 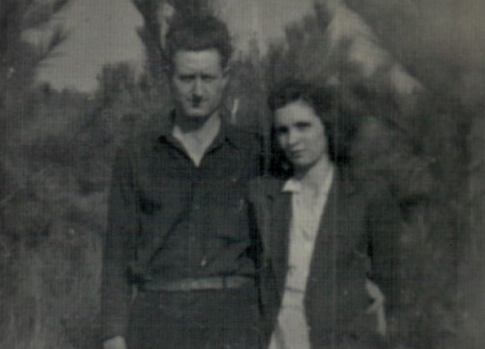 A young Ethelene and J.C.

WESTOVER — Ethelene Hallman of Westover has witnessed something few of us have seen—she has lived a century of life. Hallman and her family are celebrating her 100th birthday, which occurred on Nov. 12, all month long.

“I don’t know where the years went. They were all good years, every one of them,” said Hallman, who is not the first in her family to leave a legacy of a long life. Her great grandfather, Asa Amos Goodwin (1807-1915) lived until he was 108, and in fact was the state’s oldest citizen before he was buried on his 108th birthday in 1915. Goodwin, who is interred in Ebenezer Cemetery in Westover, had more than 400 living descendants, according to a newspaper clipping from the era. 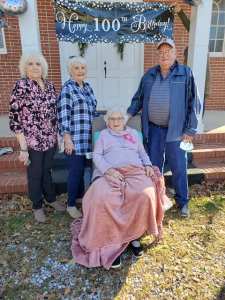 Hallman with some of her children.

“I’m just really blessed, you know, with so many of my children, and all of them just mean so much to me,” she said. “They are all my joy. They always have been my blessed joy, and they still are.”

Many family members and friends gathered on Sunday, Nov. 3 at Mt. Tabor United Methodist Church in Westover for a special drive-by birthday celebration, held a few days early in anticipation of the big day. Hallman sat outside in front of the church as everyone drove by and shared well wishes.

“It was fun. I mean, it was a crowd of people, I don’t know how many. It was wonderful,” she said.

On the date of her birthday, Hallman celebrated with a smaller gathering out on the porch of her home, where she lives with her daughter, Bobbie Johnson. And of course, there was plenty of birthday cake.

“It was a very nice birthday that I had,” she said.

In fact, the house where Hallman currently lives is where she raised all five of her children. She has lost one daughter, Eleaine Lunsford, and her other four children are Bobbie Johnson of Westover, Embry Robertson of Harpersville, Betty Lee of Chelsea and Linda Vick of Childersburg.

“My husband (J.C. Robertson) and I, we got married and of course he was in logging,” Hallman recalled. “He did that until the power plant (in Childersburg) started, and he got a job there, and he worked there and we built our first house. Then, it caught fire and burned, and our neighbors and family helped us build the house that we’re living in right now.”

Hallman is the daughter of Ben and Addie Smith, but her mother passed away when she was only 4. Her stepmother who raised her from the age of 5 was Elsie Smith. The only living sibling is the youngest of the bunch, Kenneth.

Looking back to her childhood, Hallman said she can still see her father working out in the field, plowing behind horses or steers. She would help him by carrying fertilizer or feed out to him. Working the land with horses instead of modern-day machinery, she said, was one of the biggest ways the world was different in those days. While that might sound like hard work, Hallman indicated there was a certain sense of accomplishment that came with it.

“I look back and, you know, it was a pleasure,” she said. “I thought then it was hard, but no, to me it was good times. My daddy was always working hard, and of course we were always out there helping him.”

When asked her secret to long life, Hallman said that question had been posed many times. While she did not reveal a specific answer, she hinted that it might have something to do with homegrown food.

“We had our own food. We had a garden and we raised our vegetables and we canned them and kept them,” she said. “Daddy would kill the hogs, and we had all the meat that we could eat. People will tell you don’t eat fat meat; it’s not good for you. Our vegetables had a piece of fat meat cooked with them.”

She also talked about the gravy made from the fat meat, which she said was good on homemade biscuits.

“That’s what I was raised on,” Hallman said. 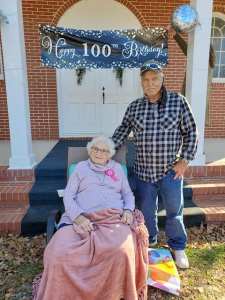 Hallman is pictured with her only living sibling, Kenneth Smith.