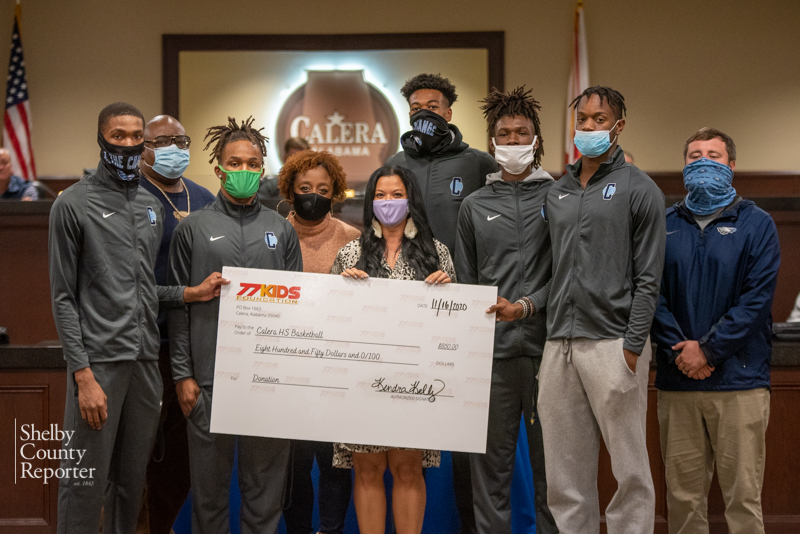 The nonprofit organization was started to benefit youth across the Southeast through sports, extracurriculars and community service programs by making opportunities more affordable.

The Foundation has also donated to Calera Elementary and Thompson High School recently.

“A lot of kids might not have the means to do extracurricular activities, so we wanted to do something to help alleviate kids being out in the streets and getting in trouble, so we started looking at avenues of ways we can give back,” said 77 Kids founder Byron De’Vinner, who grew up in Calera.

De’Vinner said the COVID-19 pandemic has created new challenges for many families who have lost jobs, which in turn affects the opportunities available to youth. He said the Calera High School Basketball donation will help fund items such as pregame meals and travel expenses.

“Some of these kids, you know, they can’t go home and get meals if they stay at school,” De’Vinner said. “I just want to be able to help these kids reach their goals. Calera has been a basketball school for a long time, and they have great talent down there. Calera’s always been a close-knit city where everybody’s known each other. This is my way of thanking those guys for what they’ve meant to me growing up.”

De’Vinner grew up under the tutelage of the late Richard Gilliam, who coached rival school Montevallo, and he also knew Gilliam’s son well.

“Even though he was coach at rival Montevallo, I was there in the house, and he treated me like his son,” De’Vinner continued. “It takes a village to raise a child. Calera’s like a village, and I’m just one person in that village.”

He also thanked the city and Mayor Jon Graham for their support of 77 Kids Foundation.