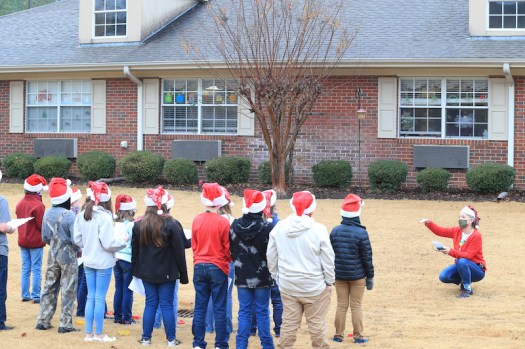 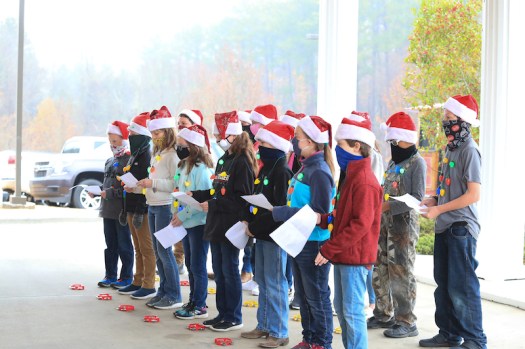 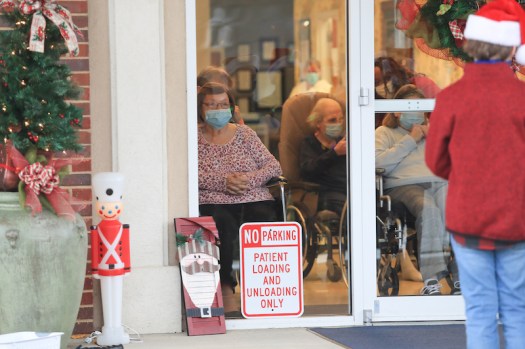 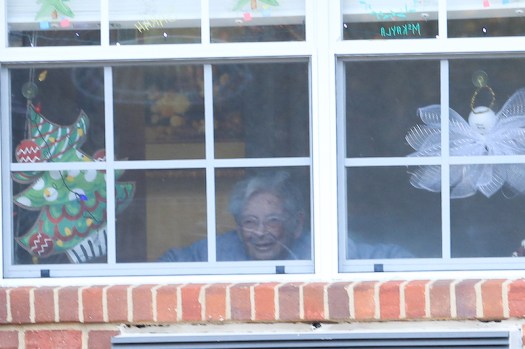 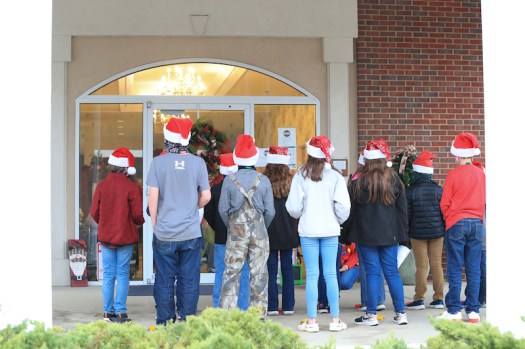 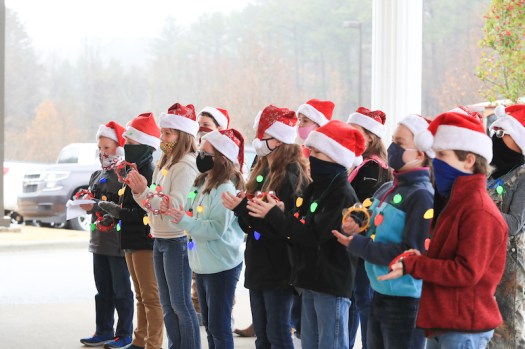 COLUMBIANA — A Columbiana trolley car rolled up in front of Columbiana Health and Rehab on a cold, misty morning. Out poured a group of kids, all donning Santa hats, lights and ringing bells—pretty soon they were gathered in front of the facility, singing Christmas carols as residents waved from their windows.

The kids in question were fifth graders from Mary Kay Park’s class at Cornerstone Christian. Over the past few months, the students have written letters, made crafts and sent gifts to the residents. Wednesday, Dec. 16 they decided to spread a little Christmas cheer by singing familiar carols like “Silent Night,” “Away in a Manger,” “Joy to the World,” “Jingle Bells” and “We Wish You a Merry Christmas.”

“We just love you, Ms. Renee. Merry Christmas!” said Park, speaking to the class’s “pen pal” loud enough so she could hear through the glass window. “We get letters back from Ms. Renee and we just get so excited,” she said.
When the students had gone through their repertoire, they made their way to a different window, starting all over again and repeating until they had covered the entire facility.

Park had been touched by the thought of residents being alone due to COVID-19 regulations, which for the most part prohibits visitors due to the risk of infection. When she saw a piece on the news about nursing home residents, she decided to get the class involved. Other classes at Cornerstone have also pitched in to help.

“We just wanted to have a friendship with them even though we couldn’t see them,” Park said. “We just thought that it would help them not to be so lonely. We want to share Christ’s love with them.”

She said the kids regularly give up their snack money and put it in a jar to help pay for bingo prizes and crafts for the residents. In October, they sent poems and candy along with their letters. In November, they made Thanksgiving placemats to help make Thanksgiving dinner special. In December, the grandmother of student Jaedon Odom donated 53 handmade blankets to gift wrap.

In addition, the class gives baskets of candy, lip balm and thoughtful notes to show their appreciation to the workers at Columbiana Health and Rehab.

But the highlight and culmination of it all was the residents’ reaction Wednesday as the children went from window to window, singing for all to hear.
“I think it’s really cool that we get to go around and sing Christmas carols to everyone,”
said fifth-grader Brooklyn Perkins, adding that Christmas is more about making others happy than getting presents.

“They don’t see their families so they might be sad, so us coming and seeing them cheers them up,” added Odom.
Music teacher Robin Davis directed the students as they sang. While she couldn’t see the reaction of the residents, she said she saw the kids’ faces react as they sang.

Davis expressed appreciation to Park and the class for their efforts.

Yolanda Gosha, activity director at the facility, said the residents enjoyed the experience and some even said they had not seen caroling like that since they were growing up.

“They loved it. We appreciate them and everyone in the community who donates and visits,” Gosha said.